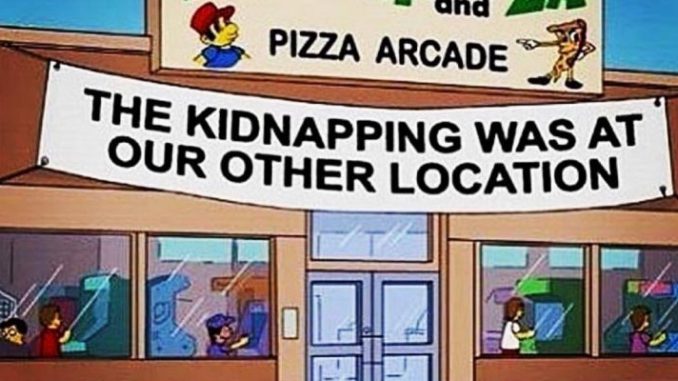 The above image a 1991 episode of the Simpsons.

News of top Hollywood executive Harvey Weinstein being a serial sexual abuser of employees has come to light and Hollywood doesn’t want to talk about it. This isn’t the first time the well-to-do in Hollywood have been accused of sexual misconduct. Former child actors have come forward claiming there are a lot of pedophiles in Tinsel Town and that they were abused when they were working on films in their youth. Would something like that really be a surprise when the same Hollywood is producing things like this? This post includes a list of documentaries and other resources related to this.

You can watch Corey Feldman’s “An open secret” at this link.

You can learn about the Dutroux coverup at these links and in the following documentary.

Don’t forget the Franklin scandal. The following documentary about the case was made but then for mysterious reasons, it was decided that it shouldn’t be aired and copies should be destroyed.

At the last minute before airing, unknown congressmen threatened the TV Cable industry with restrictive legislation if this documentary was aired. Almost immediately, the rights to the documentary were purchased by unknown persons who had ordered all copies destroyed.

A copy of this videotape was furnished anonymously to former Nebraska state senator and attorney John De Camp who made it available to retired FBI Agent Ted L. Gunderson. While the video quality is not top grade, this tape is a blockbuster in what is revealed by the participants involved.

The quality of this film is poor, but we are lucky that even this one copy survived.

Here is the book the above documentary was designed from. The Franklin Cover-up: Child Abuse, Satanism, and Murder in Nebraska

Here is another book. The Franklin Scandal: A Story of Powerbrokers, Child Abuse & Betrayal

The following is a lecture given by Ted Gunderson, a former FBI investigator who got involved in these issues.

For a decent synopsis, see the pedophocracy section of this free e-book.

12 Replies to “An open secret”