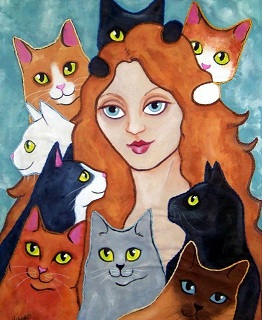 No affiliation with Atavisionary.com. See more artwork at this website.

A few months ago, I went out with a group of friends for a few beers. Among them were these two women (let’s call them Jane and Mitzi) who spontaneously broke out into a conversation about a third woman (Let’s call her Amy) who had left earlier.

Jane was telling Mitzi about how she and Amy had been hanging out regularly, mainly to go to the gym. Amy had told Jane a little bit about herself. She had very strongly wanted children for a long time, but did not appreciate that it might not happen. However, now she is 40, single and the chance that she would ever be able to have one is very low and she knows it. She focused on having a good career during her youth, and unfortunately, that meant she had to do a lot of traveling and moving, thus never was able to secure a guy who would commit. Without other opportunities available at 40 she is committed to that trail. Her most recent attempt involved moving to Florida for a guy, but he turned out to be a “douche-bag”. Hmmmm.

Of course, her explanation for never successfully forming a family is “it just didn’t happen”. It wasn’t that she has undesirable personality traits for being a wife and mother and couldn’t get a guy to commit. It wasn’t that she wasted the prime fertile years trying to be the best wage slave possible. No, her ability to form a family was completely and totally dependent on larger society acting on her. In her own mind, she has hypoagency. It isn’t just prig progs who assume hypoagency in women; women themselves rarely take responsibility or control for the outcomes in their lives.

And in the past, this might have been legitimate to feel hypoagency. Before feminism began its destruction of society, there were many, many social safeguards to prevent women from ending up childless. The entire community had certain values, and her parents and other family and church would have tried to steer her the right way; not any more. Unfortunately for her, feminism has destroyed the safeguards that could have prevented her from becoming a spinster.

Interestingly, Mitzi and Jane had this discussion in utmost seriousness. They were legitimately concerned and fearful (understandably) that they could end up childless spinsters as well. They didn’t come out and say they were worried it might happen to them too, but you could tell by their tones and serious demeanor that something was really striking a nerve. I don’t discuss red pill concepts in these situations, but concealing my schadenfreude wasn’t easy.

This isn’t the first time I have heard the line “it just didn’t happen”. This seems to be common amongst ~40 year old spinsters. There is even a woman at work in the same situation who used the exact same line. If women can’t accept responsibility for the consequences of their own choices and those choices frequently lead them to objectively bad ends they find despairing and outsiders find tragic, then it makes sense to relieve them of the power to make these mistakes.

The woman who has not had a child remains incomplete, ill at ease, and more than a little ridiculous. She is in the position of a man who has never stood in battle; she has missed the most colossal experience of her sex. Moreover, a social odium goes with her loss. Other women regard her as a sort of permanent tyro, and treat her with ill-concealed disdain, and deride the very virtue which lies at the bottom of her experiential penury

One Reply to ““It just didn’t happen””