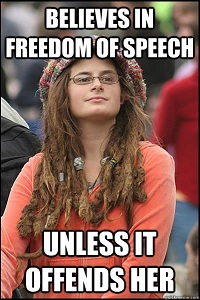 A prig is a person who displays or demands of others pointlessly precise conformity, fussiness about trivialities, or exaggerated propriety, especially in a self-righteous or irritating manner. Also, A self-righteously moralistic person who behaves as if superior to others.

Prog is an abbreviation of Progressive. Among other things, the progressive believes in egalitarianism in such a way that it is more accurately thought of as an example of faith, rather than an objective appraisal of human nature.  Since egalitarianism is incompatible with biological and even some cultural explanations for disparities and the occurrence of under-represented groups, progressive leftoids have to assume that hypoagency (See also) of those groups result from the unfalsifiable hypotheses of institutionalized racism and sexism. Being unfalsifiable, these concepts clearly fall within the realm of pseudo-science, despite the idea being popular among left-wing social academics.

Therefore, a prig prog is an irritatingly self-righteous person who demands or displays precise conformity and exaggerated propriety towards moral precepts founded on progressive ideology in order to signal their self-perceived moral superiority. This mostly revolves around promoting egalitarianism, but can occur with other pet progressive issues. Progressive ideology in this context has also been termed political correctness.

In example, during an interview with NPR Adam Carolla experienced the absurdity of a white male prig prog being very offended on behalf of an Asian thede that he is not actually representative of.  The key motivation of this interviewer was to project a sense of his supposed moral superiority relative to Carolla to NPR listeners, who would vicariously be able to experience this false moral superiority. This situation is a great example of the religious character progressive dogma. Only a profound sense of pompous self-righteousness could lead him to actually believe he has any idea about how Asians might feel or react to this clip, let alone know that they would be hugely offended. In fact, given that it was the Asian comedian who committed the blasphemy, it is clear how little he actually understands the other group.

One of key features exposed by situations like this is the ironically paternalistic and objectifying attitude that prig progs display in their concern for supposedly oppressed groups.  The group in question is considered so weak and sensitive that constant censorship is required or else they will be forced towards bad outcomes despite any and all efforts on their own part. They are simply helpless objects floating in the breeze with no control of their direction or destination. The prig prog position is one of the worst examples of a discriminatory and objectifying attitude they rancorously denounce.