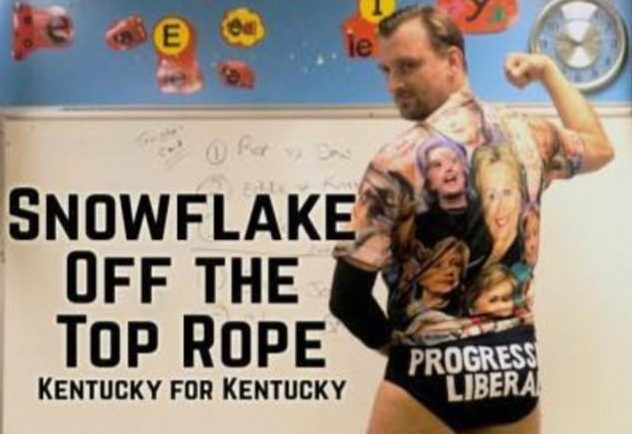 I found this recent NPR article on wrestling heel “the liberal progressive” to be uncommonly entertaining.  As far as I can tell, deadspin was the first to cover it and the story has been making the rounds since [see also]. Apparently a guy created a professional wrestling persona known as “the progressive liberal” to be a heel. Basically a heel is meant to be the bad guy that the crowd loves to hate. Andred staters love to hate coastal elitists. Who doesn’t?

I have never been a fan of professional wrestling because it always seemed hocky and obviously fake. However, lots of people do seem to like it for some reason.

In character, Harnsberger tells crowds he’ll take their guns. He says he wants to “reprogram” Trump supporters to make them favor renewable energy over coal.

“If I’m standing in front of you, I’m grabbing each of your wrists, crossing your arms, then twisting you for a standard neckbreaker. I call that the Liberal Agenda so then the announcer says, ‘Oh, he hit him with his Liberal Agenda!’ “

In the 80s, the heels were typically Russian or in one case Iranian. The thing these have in common is that they were widely perceived as the enemies of America and thus the American people. These were the guys a lot of people were ready to go to war with. I think it says something about the direction America is heading when a villain based on coastal elites makes such a successful foil. We are living in interesting times.

One Reply to “The progressive liberal: Professional wrestler”