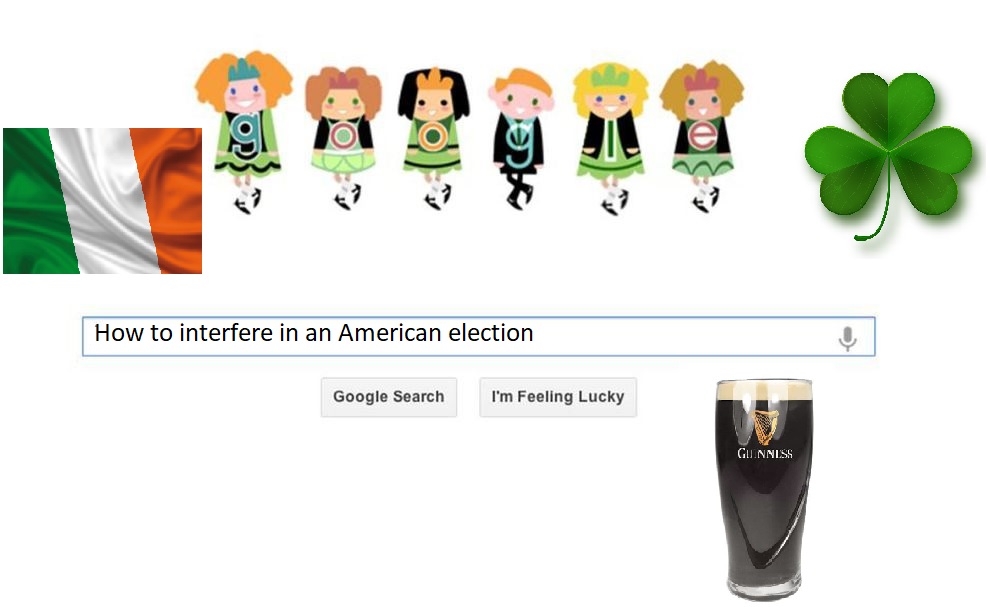 With the release of Project veritas’ google expose yesterday, the acceleration continues apace. I do encourage you to watch the full video; written transcripts don’t quite capture the self-righteous smugness of that potato glutton. Something tells me we will never hear the MSM talk about Irish interference with the election.

(Here is the video report on bitchute, same as below hosted on project veritas, and here is the full leaked internal document on search biasing from google. You can see Jen Gennai’s half-assed response, now removed because of hostile feedback, here.)

I should note that the project veritas domain was completely down for several hours yesterday when this was first published. The reason is unclear.

Of course, big tech censorship of non-progressive thought is nothing we on the dissident right haven’t known about for a long time. It is quite obvious to anyone who is actually paying attention. Which is why this revelation isn’t really all that revelatory. But perhaps it is new to the hordes of normies who still refuse to pay much attention to everything they have known and loved being destroyed right in front of their noses.

As is implied by the comment which got the account banned, I did not get particularly invested in this. Like I said, this has been going on for a long time, and this was completely unremarkable to me and as such I don’t get very emotional about it anymore. In fact, I didn’t even bother giving it its own submission because I felt it was the exact same topic as that google traffic update that was the original post. I just gave the tl;dr and moved on. Clearly, though, reddit knew just how big a deal it was (because they are doing it too) and quickly swooped in to hide it.

That previous link itself is kind of interesting and just additional confirmation about the deplatforming agenda of big tech. Google had a June update which changed their algorithm in such a way that many, many small independent media sites had their traffic slashed (and even some big ones like dailymail). As you might guess, most of those sites leaned politically conservative. (Here is another link on Facebook banning the zerohedge domain as well. Also don’t forget the book bannings from amazon. You can still see the blank spots on my books page and sidebar for each of the removed books as well. I left them there as a reminder.).

Another point I should make, is that when I went back a few weeks later to check on that google June update link for this post, it was of course removed as spam by reddit itself, with no notification to me or the other mods that this already approved link, submitted by a mod was removed by the site after it was already visible to users for some time. I am starting to wonder about how many other links from me and others are removed silently that the mods never find out about. I will discuss my discovery of their (what I am calling) hard-ban system later in the post.

At first when this happened I thought it was mainly because I trolled the /r/forwardsfromhitler sub by pointing out their hypocrisy with respect to abortion:

Admittedly, that second troll comment is pretty bad out of context. However, I am sure it did its job pissing off that leftist. The admins apparently really like that leftist circle jerk and they didn’t like my trolling. This comment earned me a three day suspension for “advocating violence” which I guess it technically does out of context. Then not too long after that the permanent ban from the project veritas link happened. I originally thought they were related occurrances, but now I am not entirely sure. It is possible that the veritas purge was going to happen anyway regardless of that earlier troll commenting. Only the admins know.

Either way, the banning of /u/atavisionary was more of an inconvenience than anything. And I quickly reverted back to my original mod account and pretty much continued like nothing had changed. I did, however, inform the userbase of what had happened because this escalation in all likelihood spells the approaching end for that entire sub. I am honestly surprised its lasted this long. I also took some steps for additional moderator accounts to be available should my current one get removed as well, but that is probably a losing battle in the long run.

One interesting thing I discovered as a result of all this is that reddit apparently has a two tier (at least) domain shadowban system. I have known for a long time about the soft-banning of certain domains like amerika.org and infowars.com which has been in place since at least 2016. Like pinterest, it was probably a re-purposing of the porn spam filter. For soft-banned domains moderators can manually approve the domain and it will appear to users instantly after the approval. Its also possible to set up an automoderator rule which does this automatically, and effectively reverses the site-wide rule. I have a few domains under this, but I only figure which ones need it by trial and error. There are probably many more I don’t know about.

Hard-banned sites are completely new to me. I have not seen this behavior before this month and I have been moderating on reddit since 2014. I suspect it is a completely new system put in place and is likely coordinated with other pushes by big tech firms, such as the big update at google early this month which effectively deplatformed many small independent news sites.

My working theory and behavior description at this point is that certain domains, including bitchute, are auto-removed. Mods can click the approve button, but it doesn’t go through no matter how many times the mod clicks approve and autmod rules won’t get it through either. Then sometimes about an hour later it actually gets approved and becomes visible to users. I suspect that the attempt of the mod to approve it gets sent to an admin and then they decide whether or not to actually approve it. That would explain the time delay. I tested this a bit with bitchute links. One of my bitchute links was approved this way, but the other link is currently still not visible to anyone other than mods. Probably because I mentioned in the title of one I was testing how the shadowbanning was working.

Project veritas was hard-banned like this 2 weeks ago when /u/atavisionary was permanently suspended for linking to them, however since the google expose became so viral they have apparently took it off of that list. My only guess is that it was far, far too obvious for far too many people and they just had to let it through before reddit got embroiled in the shitshow themselves. I would guess early yesterday a lot of people were getting pissed about why their links weren’t showing up before the change was made. As of now, it seems like reddit is probably going to get away without many people noticing their own progressive narrative pushing, but we will see. I look forward to project veritas getting a reddit insider.

This also explains why image posts of headlines are so often used on these social media platforms compared to direct links. Direct links are much easier to filter than unique image posts. It seems headline screenshots are here to stay.

Probably not coincidentally, given the obvious big tech collusion so far this month, we also had a social media site ban ALL Trump supporters on their site.

I was not familiar with ravelry before this came out. It is apparently a social media site devoted to knitting. This suggests an overwhelmingly female userbase. I also venture to guess this is probably what the rest of big tech is looking to roll out before the 2020 election, and this is just testing the waters. What I find interesting about this step is that I am not surprised a mostly female oriented site is the first to just come out and blanket ban the political opposition. Enforcing absolute conformity is a much greater temptation for the female brain apparently. Press F for the Trump girls on there.

The time where either the SJWs gain full control to all routes of information delivery, or they are removed from power is quickly approaching. I can’t say which way its going to go, but clearly there are people out there pushing hard to prevent the complete takeover by the globohomo hegemony. It will be an uphill battle. Either way, we probably don’t have much longer to wait. It will tip decisively one way or another quite soon. As unpleasant as the world has become, I doubt it will be even close to what will happen if this one is lost. Let’s hope we won’t have to press F for ourselves.

Please support my work by purchasing a copy of Smart and sexy: the definitive guide on sex difference in intelligence:

2 Replies to “Big Tech censorship: It is personal whether you like it or not.”