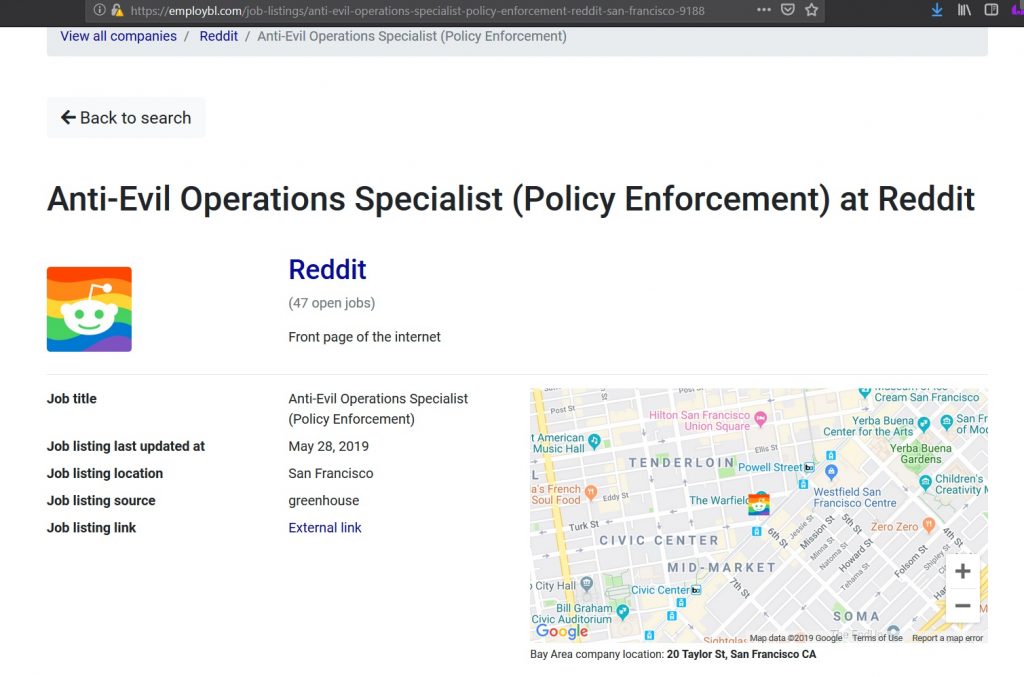 This title, not mine, is as Orwellian as it sounds. This is the title of the reddit admin team which patrols all subreddits silently enforcing SJW agendas, as well as hiding the malfeasance of big tech. I can’t help but wonder if it isn’t a coincidence that this position was also created in Ireland, same origin of yesterday’s google exec. Is there something about Dublin which makes doing this easier? Probably not, because you can also apply for the job in San Francisco if you are interested. Its truly a global effort to censor all views not desired by the tech overlords and killary supporters and it will only get worse as they get more xirs on-board.

The Screen-shot above was sent to me by a moderator of /r/the_donald, which was today quarantined just two days after google was exposed and on the day of the first Demoncratic debate. A quarantine throws up a big scare screen when you go there and removes the traffic from being seen in the normal que on your frontpage, and on mobile requires you to be logged in. The storm must be coming soon to be so brazen with such a popular community with perfectly acceptable content. What you are looking at is the moderation log filtered for the admins in /r/the_donald. Whenever a moderation action is done in a sub, it is added to that log, which can only be viewed by moderators. It shows comment removals mostly. While the user, under an alt, didn’t specifically say it was from the_donald, that was the only other place I had submitted the article (and commented) on google’s June update so that is the only place this screen shot could be from.

After being notified by /r/the_donald mod that reddit actually records this team’s actions, I sure enough was able to discover that was the same group which removed my post. I really can’t believe they didn’t make this completely silent, or that others haven’t brought attention to this earlier. I will note that is the only time this team interfered in my sub, so I would not have been able to notice it before this action.

Yesterday, I did a write-up on the separate google expose from project veritas and on how they and other big tech companies are progressively censoring more and more content they dislike. I can only hope reddit gets its expose soon enough, but for now I can just tell you what I have found based on my experience as a mod, which mostly means things discovered by trial and error and a bit of speculation about how exactly it works internally for the site.

One of the things I pointed out yesterday was the ban I received for sharing the pinterest expose which hid pro-life sites using a porn filter. During that write-up I also noted and pointed out that in addition to the ban and removal of the comment, my link describing the changes at google to harm small news sites was also removed sometime after the atavisionary account was removed and after the link had already been visible for a time. I remarked that this is relatively new behavior that I had just noticed. I labeled it as hard-banning and indicated that it appeared to be some sort of referral system to the admins that was newly instituted.

I have known for a long time about the soft-banning of certain domains like amerika.org and infowars.com which has been in place since at least 2016. Like pinterest, it was probably a re-purposing of the porn spam filter. For soft-banned domains moderators can manually approve the domain and it will appear to users instantly after the approval. Its also possible to set up an automoderator rule which does this automatically, and effectively reverses the site-wide rule. I have a few domains under this, but I only figure which ones need it by trial and error. There are probably many more I don’t know about.

Hard-banned sites are completely new to me. I have not seen this behavior before this month and I have been moderating on reddit since 2014. I suspect it is a completely new system put in place and is likely coordinated with other pushes by big tech firms, such as the big update at google early this month which effectively deplatformed many small independent news sites.

My working theory and behavior description at this point is that certain domains, including bitchute, are auto-removed. Mods can click the approve button, but it doesn’t go through no matter how many times the mod clicks approve and autmod rules won’t get it through either. Then sometimes about an hour later it actually gets approved and becomes visible to users. I suspect that the attempt of the mod to approve it gets sent to an admin and then they decide whether or not to actually approve it. That would explain the time delay. I tested this a bit with bitchute links. One of my bitchute links was approved this way, but the other link is currently still not visible to anyone other than mods. Probably because I mentioned in the title of one I was testing how the shadowbanning was working.

Well, we now know that this is indeed a new system put into place by reddit this year (at latest in May) judging by the previously linked Irish times article. Given the double-speak title of “anti-evil operations” and that they are actively hiring in this area so you can expect it to get a lot worse. Reddit is going to get much, much worse, very quickly. What are these people afraid of?

EDIT: Here is another mods concern about this program from months ago:

I currently mod a subreddit for my local community. Although we have a decent amount of mods for the activity of the sub, only two of us are active so I like to keep active watching said activity and keeping an eye on the mod logs. I was very busy the past two days so I only just got a chance to check the recent logs today. Imagine my surprise when I see activity removing a post from neither any of the mods or automod but an entity called “Anti-Evil Operations”… I’m unable to find any information on Reddit itself but a Google search has turned up with the term in apparent job listings Reddit has posted recently.
What is this? Why is activity suddenly being taken in subreddits by a person in this new position that circumvents moderators’ decisions to not remove certain posts/comments without prior communication with mods? I completely understand the recent activity by admins handling aggressively inappropriate subreddits with bans and such, but this is hardly that situation. Literally a random comment that doesn’t even rise to the level of some posts I have had to remove from our sub that, after I made the decision to not remove, was over-ruled by some newly hired individual that is now invisibly policing our subreddit.
I hate to sound uppity and I’m the first to say Reddit isn’t a democracy and is a privately owned website, but I’m incredibly uncomfortable with this new move that seems to have gone under the radar of every mod that actively works to police their own subs. Any explanation/clarification of what is going on would be great because I can’t seem to find any other information…

Please support my work by purchasing a copy of “Smart and Sexy.” The definitive guide on sex differences in intelligence.