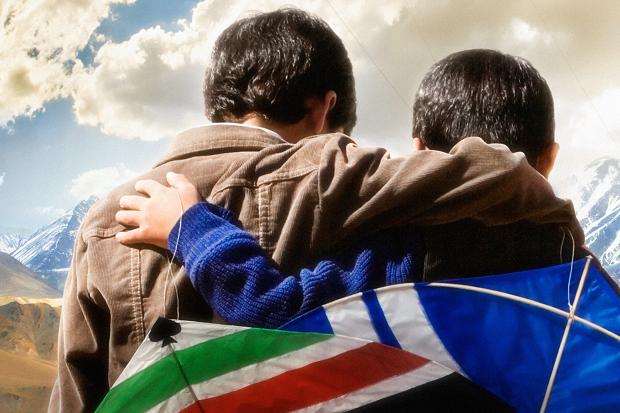 I was recently asked to help a 9th grader with a “research paper” that was supposed to be related to a book he was assigned to read in class. This book was called “The Kite Runner.” I had never read this book before, so I was limited to focusing on more generic elements such as “Don’t begin every sentence with the pronouns, and especially not the same pronoun” and make sure that when you switch subjects you make it clear that you did instead of using “they” again and again while switching between different groups: Both problems this student had. (Independent of the book content or essay topic, the essay was horrible. He almost certainly didn’t read the book and didn’t try very hard to BS his way through it).

However, I am not entirely convinced that this student’s lack of interest both in the book and in the essay were all that bad in the grand scheme of things. Specifically, the summaries I have since read on this book strongly suggests to me that it is a very clear case of progressive propaganda being forced onto unwitting children. In fact, I was at once reminded of my own experience in high school with similar propaganda. “Speak” by Laurie Halse Anderson. Where as speak was only concerned with feminists conceptions of rape, “The Kite Runner” appears to focus more on Muslims/Afghans (although it also goes into rape as well).

In summaries of the plot, it follows two boys in Kabul who play with kites together. One is of an Islamic sect which is considered lower class than the other. The lower class boy in one scene protects his superior from being beaten up, while in another, later scene the higher class boy does nothing to stop the former from being raped (by a male). Typical prog lionization of lower classes; as well as an awkward insertion of rape. Later the high class boy escapes the soviet invasion and moves to America as a refugee where he experiences guilt at his luck generally (he regularly imagined the hard lives of his friends back home) as well as specifically with respect to this friend he didn’t save from the rape. Finally, he finds out that this friend who he didn’t save from a rape both had died and also had a son during the general turmoil in the country. He goes back and saves this friend’s son and brings him to America as well.

In this story we seem to have both support of cat-lady style saving of refugees as well as touching on rape hysteria. There was probably little mention that there might be a connection between the ethnicity involved and tendency for rape and violence. At least that is how it seems. Without reading the book, I can’t be entirely sure of how much it is in fact propaganda and how much it is just a story (though my own experience with progressive propaganda leads me to a specific guess). I won’t comment further on the content of the story itself. However, the student also showed me his rubric and instructions on what topics were allowed for the essay. All of the designated topics were clearly progressive points of interest (such as “human rights,” which is what this student chose) which leaves no doubt that whatever merits this story has on its own, if any, it is being used in schools to indoctrinate children into progressive positions.

Moreover, the author also hinted that the story is at least to some degree auto-biographical. The degree that his personal life experiences are in the book, or the degree to which it is completely fictionalized, is not entirely clear. Summaries imply that it isn’t really known how much really happened to the author. My guess is that it is mostly fiction with very loose inspiration from real life events, with the events radically changed in the process of writing. It is far easier to warp fiction to meet the acceptable narrative than to fit real life to it. This ambiguity probably allowed the author to sell more copies to gullible progressives without outright lying about its authenticity. From Wikipedia:

According to Hosseini, the narrative became “much darker” than he originally intended. The Kite Runner covers a multigenerational period and focuses on the relationship between parents and their children. The latter was unintentional; Hosseini developed an interest in the theme while in the process of writing. He later divulged that he frequently came up with pieces of the plot by drawing pictures of it. For example, he did not decide to make Amir and Hassan brothers until after he had “doodled it.” Like Amir, the protagonist of the novel, Hosseini was born in Afghanistan and left the country as a youth, not returning until 2003. Thus, he was frequently questioned about the extent of the autobiographical aspects of the book. In response, he said, “When I say some of it is me, then people look unsatisfied. The parallels are pretty obvious, but … I left a few things ambiguous because I wanted to drive the book clubs crazy.”

Even though the author does seem to be pretty open about it being almost entirely a fictional story, it has not seemed to stop progressives from believing it is only a slightly fictionalized auto-biography.

Anyway, I focused mainly on non-content related suggestions to improve his essay. However, I also made a point that when he spoke of human rights he did so in a very general sense, yet all of the examples from the story were from a very specific group of people with a very specific religion. After all, we don’t hear about Theravada Buddhists raping and murdering Mahayana Buddhists. To generalize Muslim culture in Afghanistan as if it were a world wide issue for every group of people is inaccurate and absurd. This is as much crimethink as I dared to inject into the situation, but I think the point was taken and will be considered by the student. In my head, I thought facetiously that the human rights issue he should write about is forcing young children in schools across the country to read and write about progressive propaganda; with their essay conclusion being determined in advance of writing. I did not say this however, as I anticipated the comment would not be appreciated by the adults who would no doubt hear about it. If you are a parent, I would suggest keeping an eye out for this story in your child’s curriculum so that you can do any necessary damage control when they are forced to regurgitate prog propaganda as a graded assignment.