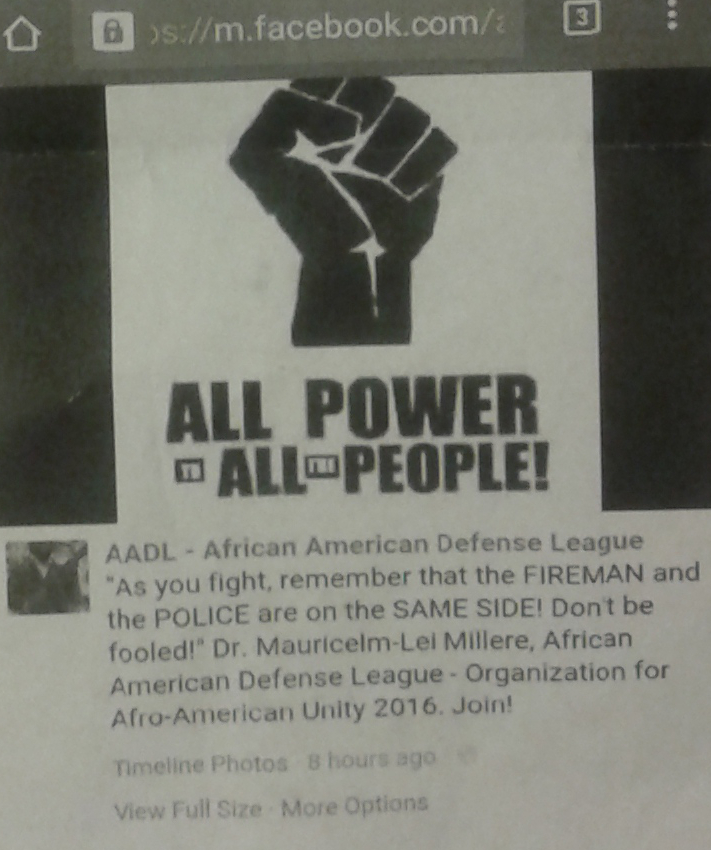 A user on my subreddit sent me a private message claiming to be a Dallas city employee (he didn’t say what he did, but I assume he/she was a fire fighter based on the memo I was sent). I was told that about a month before the current shootings, a memo went out from the Dallas police department warning city employees to be careful because a black supremacist group  known as the African American Defense League (AADL) made a facebook post telling its members to not only target police in their “fight,” but to also target fire fighters as well. This post apparently received enough support from Dallas area blacks that the DPD felt the need to warn at minimum the fire department if not all city employees. After the shooting last week, the user felt that this memo should be publicly shared even though it is intended only for city workers. He asked me to post it for him so that it could not be traced back to him. I agreed and here it is (I covered up any phone numbers, emails, or individual names on the document): 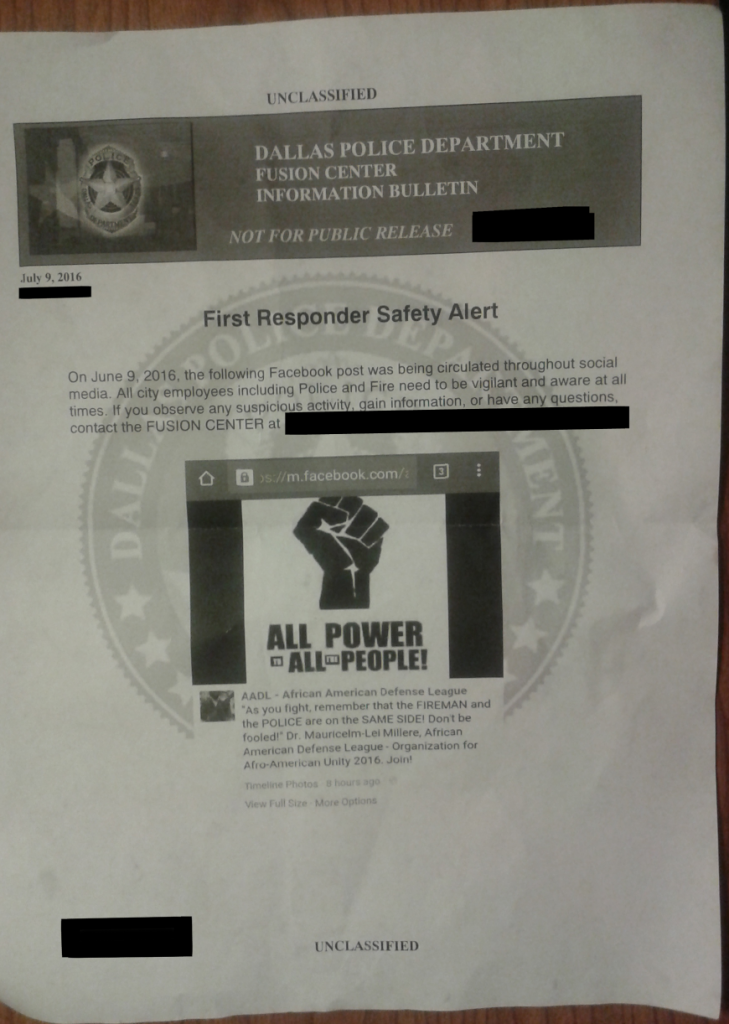 The anonymous Dallas employee did not provide me with any other comments, he/she just wanted me to share the memo and chose me since I am fairly accessible on reddit. The rest of this post is my own thoughts and has no association with the source.

The first thing that sticks out is the Marxist fist pump. At least there is no confusion what branch of political thought is creating these terrorists…

The second thing that pops out is that clearly the DPD had at least a month warning about the increasing militancy of the local black population. Could they have launched investigations then and possibly prevented this shooting? Was this group officially recognized as a terrorist group or was it only lightly covered via this memo? Did some of the perpetraitors (pun intended) like this comment? The existence of this document raises a lot of questions.

Lastly, the fact that these groups would target fire fighters boggles my mind. If a fire fighter shows up near you the only thing he is going to be doing is trying to save lives. Your life, your friends life, your child’s life and whoever else is in need of saving. This doesn’t always mean fires either. Many if not most fire fighters do double duty as emergency medical technicians. If you get in a wreck, it is usually a fire fighter using the jaws of life to get you out of your crumpled car. You or someone you know has a drug overdose, including alcohol, you bet it is likely a fire fighter keeping you alive long enough to get to the ER. Stroke, heart attack, you name it, these are all things fire fighters come across day to day. Fire fighters are not involved in law enforcement at all. How could anyone be that stupid to want to target them? If you chase them away or kill them, it is you, your friends, and family who are going to die when help doesn’t arrive.

I will hazard to guess it is a symptom of a population of people who have on average only an 85 IQ [PDF]. Since IQ is a distribution, half of the black population falls below that. In the past, that half of the black population would have been considering mentally retarded. However, in 1995 the threshold was shifted down to 70-75. Care to guess why this was done? A hint:  It wasn’t because people in that range became more competent. It was because half of the black population had to be officially classified as retards and political correctness could not let that stand. So, the establishment threw out all experience (people below 85 IQ really aren’t very functional) and just changed the definition to sound better. You can’t make this stuff up.

I think we need to re-evaluate our understanding of these violent black groups. These aren’t normal human beings; these are people who are literally retarded via the older and more accurate definition (IQ<85). Chances are that as a group they are just too dumb to understand the basic concepts we take for granted. For example, fire fighters save lives and shouldn’t be harmed. Local businesses provide you with valuable services, but they won’t stick around if you destroy them. If you act like a complete git and threaten a cop, chances are you are going to get shot and possibly killed.

Frankly, other races should stop assuming blacks have any sort of agency at all. Their IQ is not high enough to allow them to think through things effectively. When you start from that premise, the practical approaches to the black problem become more obvious. Allowing the mentally retarded portion of black population (i.e., half of their population) the level of freedom they currently waste has been a complete disaster. They constantly kill each other (and us when they get the chance), they rape, they steal, they are unable to perform adequately at decent job and they also suffer catastrophic family break down. Plus, their general criminality puts them under the constant, and warranted, suspicion of law enforcement.

I am sure their lives are pretty miserable. They blame whites for their failures, and while their failures are of their own making, there is something to that. Is it really fair that we allow millions of mentally retarded people go about their business without any adult supervision? Is it really fair for us to believe that these people can take care of themselves when quite obviously they can’t? If a child suffered neglect, I think they would have a case to resent their parents. While this isn’t the same, we don’t owe blacks anything, I can see a certain similarity in the situations. We could legitimately make their lives less bitter while not exacerbating the problem for future generations. However, the only way to do that is to accept that we aren’t dealing with rational human beings with agency, but a large population of the mentally handicapped. Letting a huge population of literal retards run wild on our streets was a huge mistake and everyone is suffering for it, including blacks themselves.