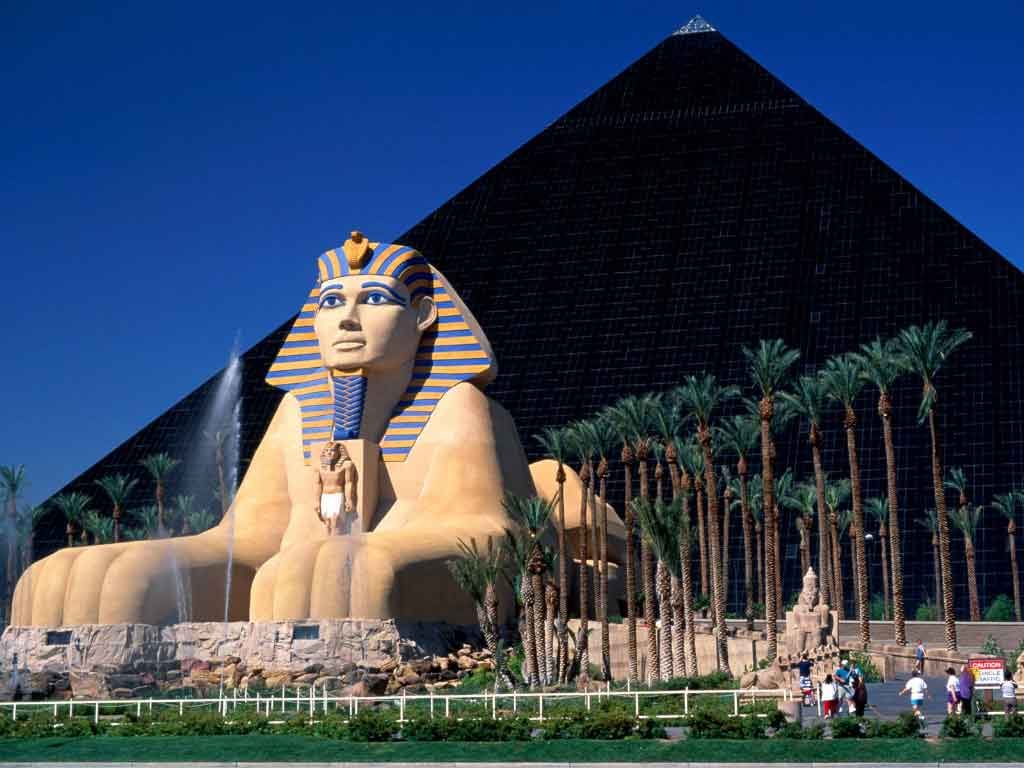 [Edit: also check out this post for additional videos and a timeline]

There is a lot of videos coming out about the shooting. I don’t know the full extent of what happened, but I can say that the following video compellingly suggests there was more than one shooter. There are quiet shots and loud shots going off meaning some are being fired close to the camera and some farther away. This taxi driver was right in front of Mandalay bay. Right after 40 seconds, you can hear the far shots, then at about a minute, you can hear the closer ones. This isn’t the only instance of this in the video, but those two times demonstrate it pretty well.

Some people say that this sound difference is because it was from two different windows. Maybe. But is moving across a room enough to change the sound so much?  Here is another Instagram video which seems to have two different guns going off over each other

Here are some additional videos which suggest gunfire coming from a lower floor.

Notice in this next one that sign isn’t there. Hard to tell, but could this be a third shooter if it isn’t in the same place? It may just be the different angle blocking the view of the sign. EDIT: Here is the original Instagram post of the below video. If you look closely, you can see that most of the flashes come from where he is pointing, but there is at least 1 flash that comes from a few floors above that.

Here is a video which is an excerpt from the first, which also seems to be a lower floor.

Here is the police dispatch audio, plus some of it transcribed out. It seems that the police were aware of multiple shooters. Here is a direct link to the audio.

“CONFIRMED there are at least 2 shooters with fully automatic weapons,” a police officer reported at 18:54 in the recording.

“CONFIRMED – Giles and Alibaba, casualties, East of the Catholic Shrine. SO WE HAVE TWO SCENES!,” said another officer at 38:30 in the recoding, confirming that there were casualties at Giles and Alibaba, a location out of range of Stephen Paddock’s gunfire from the Mandalay Bay.

This is in addition to a number of rumors going around that people say they saw shooters in other casinos. I’ll let you make up your own mind. 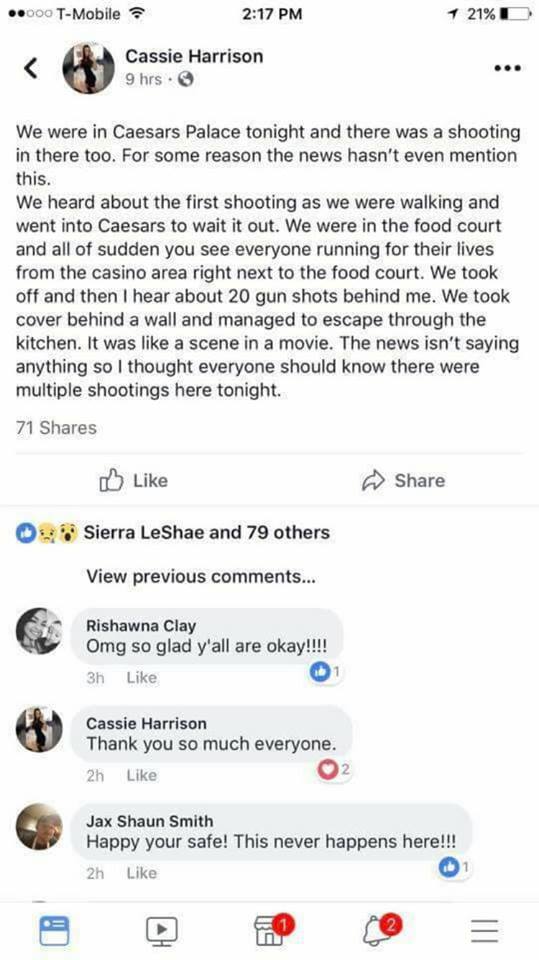 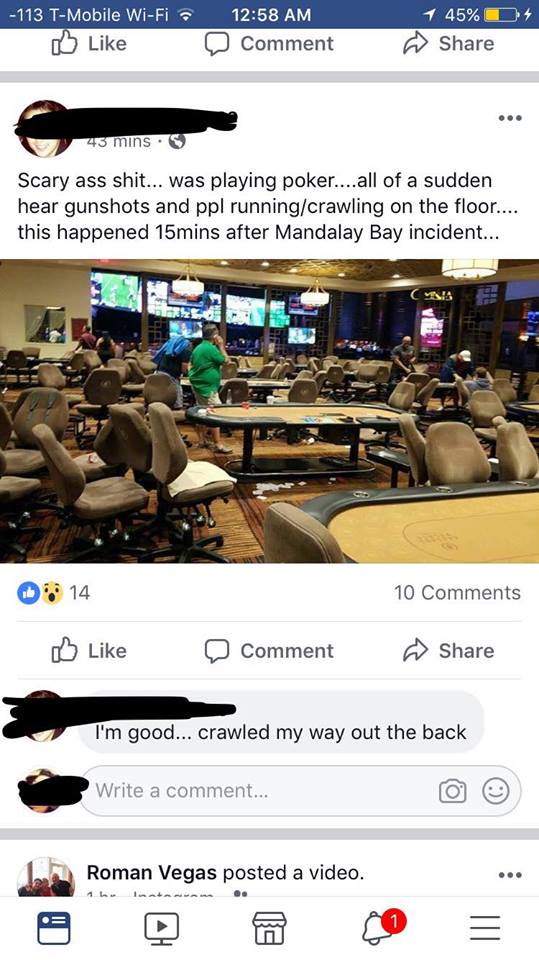 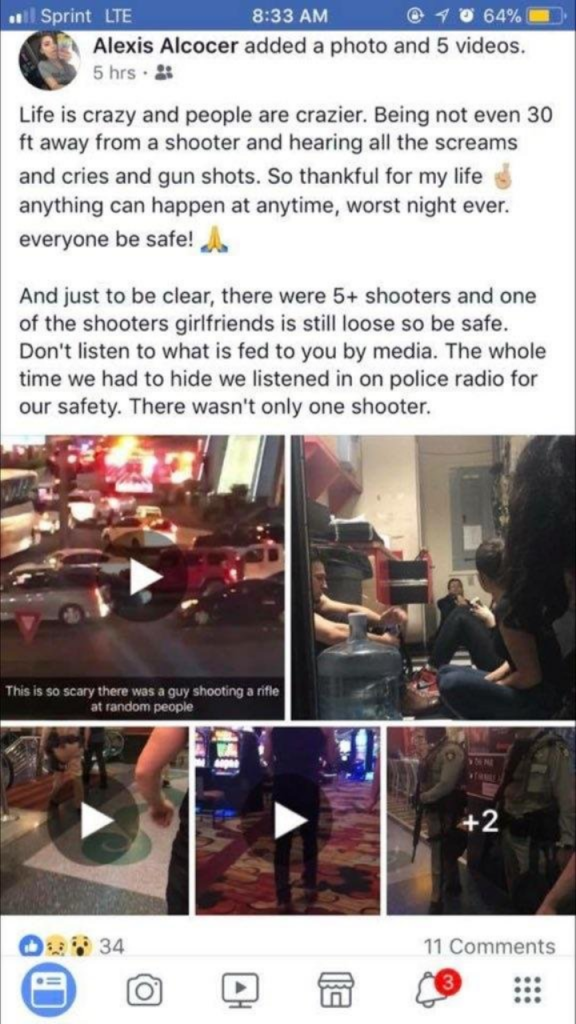 Edit: Interview with a girl who claimed there were shooters on the ground. Media cuts her off a bit suspiciously to say there was only one shooter. Found this through this post with other links. There is a lot of eyewitness testimony saying that there was definitely more than one shooter in those links. Do go through it. Rocky Polermo, a victim who was covered by MSM testifies that there were multiple shooters and he was hit by someone on the ground.

Here are even more facebook testimonies about the shooting.

Here is a red ice interview which has more of the above-listed interview and some discussion of what is said.

Women in the Bellagio claims the had to duck to the floor to avoid gunfire while inside the hotel. The hotel was on lockdown.

3 Replies to “Were there two shooters in Las Vegas?”