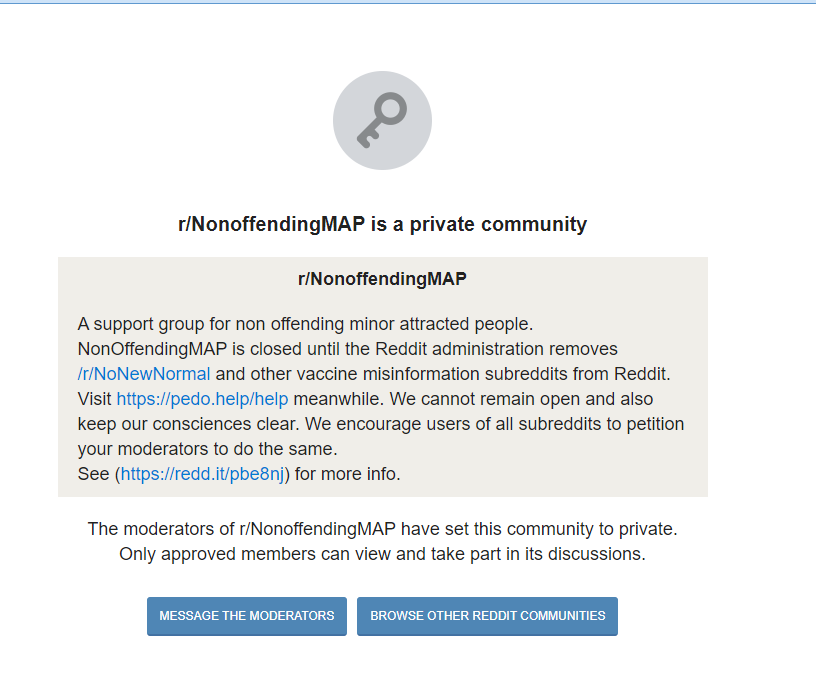 [Yes, the above image is a real community of degenerates pretending to have the moral high ground.] I actually don’t go to reddit anymore, but I will see things happening from the chans or other places from time to time when they get posted about. This seemed interesting enough to comment on, and to express what I think is actually happening. In short, shill mods are privating their communities to piss off users and otherwise make it appear organic when reddit bans subs who question covid hysteria and specifically the desirability to get injected with completely unproven vaccinations. The title explains it all, but here is the message for the astroturf campaign from /r/futurology:

And a slightly different one from /r/agedlikemilk

/r/agedlikemilk is closed until the Reddit administration removes /r/NoNewNormal and other vaccine misinformation subreddits from Reddit. We cannot remain open and also keep our consciences clear. We encourage users of all subreddits to petition your moderators to do the same.See https://redd.it/pbe8nj for more information. For a list of currently blacked out subreddits, see https://www.reddit.com/r/N8theGr8/wiki/subs_going_darkDiscuss this action: https://redd.it/perfsu

I spent a number of years watching reddit decline into the shithole it is today before getting ousted myself. Most of that decline was a result of a steady and accelerating increase in shills, bots, power mods. and, of course, collusive admins. The later two are important to understand for the current campaign.

Power mods are just individual accounts which moderate hundreds or thousands of different subs and most of these accounts collude with admins when they want a political agenda pursued. Especially when excuses are needed to ban communities disliked for political reasons but who haven’t actually violated any rules.

Power mods are so common, in fact, that this whole campaign could be the work of less than 100 individuals. The most prominent mention of this was probably /u/maxwellhill. While I don’t know if it was literally Ghislaine’s account, there is no question that it was a power-mod account able to shape the political atmosphere of hundreds of different communities. I bet you can guess what the politics of this account were.

The long march through reddit is fairly complete at this point, and so if you believe this is really organic and millions of users care about /r/conspiracy not trusting the vaccine, I have a bridge I’d like to sell you. The transparent nature of this shill campaign is such that its hard to believe these asshats are even trying it.

The whole situation is analogous to what is called “friendly lawsuits.” A radical left NGO has friends in an agency, like the EPA. They get together and decide how they want things to change. The NGO then sues the agency, the agency throws the case and gives into the demands they both wanted from the beginning. New legislation and more fake elections not required. And best of all, it all has a nice cover story as if the whole thing were organic and the agency is just following the popular will. Or close enough.

The 100 or so power mods, maybe a lot less, pre-arranged the outrage with admins on tranny discord. They then set up the campaign and piss off the few non-shills still using reddit. And BTW, anyone not following the narrative has been individually banned long ago, which helps add to the lie that this campaign represents the popular position. Having only shill comments heavily skews away from a realistic representation of the population. Reddit admins acquiesce and ban the communities they wanted to ban all along. A cover story of popular will is created and its not to be realized its just the TPTB forcing their narrative by getting rid of communities pointing out their bullshit. Plenty of fake news about how average sensible people are outnumbered by lunatics is likely, and reddit had no choice but to censor. It would be comical if it weren’t such bullshit.

You don’t need real grassroots campaigns to support the narrative of the regime. The regime looks after itself.