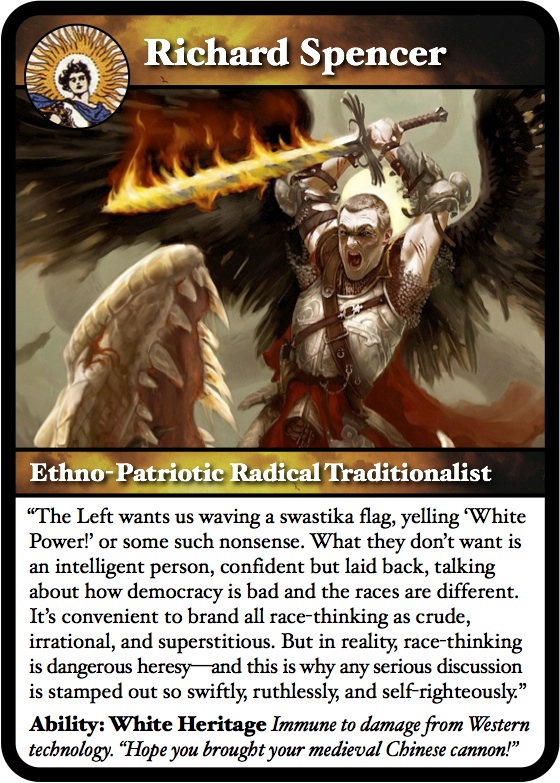 Some conspiratorial accusations have been going around about Richard Spencer, founder of the national policy institute and Radix journal. The claim is that he is “controlled opposition.” The idea being that he is a government shill who is tricking people into exposing their real identity and/or trying to radicalize the “alt-right” to discredit the overall movement. Evidenced by giving “Nazi Salutes” and more seriously, allowing the mainstream media to attend his conference. These claims were voiced most loudly by Mike Cernovich, a journalist who made a name for himself during gamergate and the trump campaign. Paul Joseph Watson of Alex Jones’ Infowars comes in at a close second in spreading this.

Notably, infowars made a substantial pivot during the trump campaign to somewhat distance themselves from previous conspiratorial material to a greater sympathy with alt-right (alt-lite?). After the pivot, they seem to have in general as much credibility as the mainstream media. I never thought I would say that, but it has only a little to do with changes at infowars and a lot more to do with the suicidal “reporting” in the MSM. When almost everything the MSM says is a lie, it isn’t hard to make a name for yourself telling the truth, even selectively.

Vox Day and some other prominent figures also seemed at least sympathetic to this view. Vox seemingly made his journey to the right through gamergate and the rabid/sad puppies campaigns. In Vox’s case, support for conspiracies seems to be a result of naked financial interest. He is named as editor on Cernovich’s book and likely stands to lose money, perhaps a substantial amount, if the broader community turns on Cernovich. I like Vox’s writing, but this naked self-interest in turning on a fellow traveler doesn’t help his credibility. The only ones deserving of a harsher fate than leftists are traitors. And just to be clear, disagreements between like-minded individuals is entirely different from the treachery of siding with leftists against fellow travelers.

I have been a participant in the Dark Enlightenment and Neoreaction for a fairly long time now. Not as long as some of the veterans, but definitely longer than most of those who now call themselves alt-right. It is hard to remember exact dates, but I started reading Moldbug in late 2013 (see also), I took over the darkenlightenment subreddit shortly thereafter, and started this blog in late May of 2014. Now I know that that isn’t quite the same thing as the alt-right as currently configured, which really didn’t exist to any substantial degree at the time, but there was and is a lot of overlap and you get to know the various publications involved. NPI, Radix, and Spencer were all well known to us back then and their work was respected and well-liked. So much so that he was easily included in an old radish post called “The heroes of the Dark Enlightenment.” The page has been taken down due to copyright complaints based on the images used, but I helpfully saved a [PDF] copy. The image at the top of this post was taken from there. The heroes of the Dark Enlightenment post was made before Spencer or NPI had gotten all that much fame. In addition, his publications have been a part of my endorsed site system ever since I created it about a year and a half ago. Well before the rise of the alt-right to its current prominence.

This presence shows Spencer et al have been around for a very long time producing content with a very consistent and respectable tone. Spencer has, in my opinion, proven his sincerity and genuineness through this long and appreciated work. His group talks about real issues and never resort to unnecessary racial epithets when discussing the biological reality of race (and sometimes gender) issues. I have a series of rules on my sub which lays out that any race or gender issue can be discussed (yes, even about jews), but it should be discussed in a rational and respectable manner. Basically, you can talk about Jewish influence in campaign finance and media, but avoid saying “gas the kikes.” You can also talk about black violence, but “lynch the niggers” isn’t necessary and doesn’t help your argument with respect to fellow travelers and curious, potential enlistments. Never once has anything produced by Spencer, NPI, or Radix ever violated these very strictly enforced rules (ask my subscribers) and that includes the transcript of the NPI speech at the heart of this controversy. Moreover, even though Spencer did say “Hail Trump” mostly ironically and to be funny, that is quite obvious, he did not himself even do the salute. To quote Steve Sailer “Here we have giving a Roman salute a Vietnamese minor league Kardashian, Tila Tequilia, and an alienated half Jew. Is this a sizable demo?” These two who don’t fit the alt-right demographic undoubtedly did it for the lolz as well, anyway, but that is besides the point. In what sane world would Spencer be blamed for their actions? Why should we be upset when leftists are triggered? Also, have we already forgotten this is no different from what half of the internet has been doing for the last year?

Now, there may be a genuine complaint about inviting the MSM. They are vile, lying cockroaches and their presence puts well-meaning attendees at risk of doxxing. A reporter from vice apparently had to be kicked out because he was trying to take pictures of attendees for this purpose. Unsurprisingly, they also lied about the content of Spencer’s speech saying that he was calling Jews soulless, when in reality he was referring to the media as a whole because of how much they lie. I don’t know which is more ironic, that they immediately proved his point by highlighting the very sentence he used to call them out or their implicit admission that Jews are heavily over-represented in the media and do the bulk of the soulless lying. It is so stupid that it almost seems like a divine influence intervened to cause the seemingly unforced error, at least for those with the eyes to see. The whole of the last year has seemed like that actually.

Now note that I say there MAY be a genuine complaint, not that there definitely is one. After the last year, I can’t deny how effective such crude terminology and iconography has been when used in the context of triggering brainwashed leftists. Every time something like this blows up, it inevitably gets proven that the media is full of shit and that many more people stop listening to them. Whatever differences Neoreaction and the Alt-right may have ( The highlights being distrust of crudeness, naive clinging to democracy by some on the alt-right, and abhorrence of mob populism), the end result in this particular case is equally lauded as good by both parties. Every time trust in the cathedral is lowered, we get that much closer to a true restoration. Spencer’s strategy of dealing with the media may work in this context and towards this aim (and this is in addition to getting more eyes reading about alternatives to progressivism). However, my opinion is that it is potentially a very dangerous gambit. The media has and will stir up a mob of proles who could physically attack and/or kill Spencer or his attendees. That is Spencer’s risk to take if he wants to personally, but I think it would be a good idea for him to avoid putting his supporters in such a risky position in the future. However, this is a mild concern and in no way warrants any sort of condemnation of Spencer.

This entire controversy was a lie manufactured by the media, and the likes of Cernovich, Vox Day, and Paul Watson, among others, jumped right on the band-wagon uncritically. They sided with lying leftists and attacked to the right. That is treachery, plain and simple. All of these people could be classified, more or less, as Johnny-come-latelys. We more commonly call this phenomenon “entryism” in neoreaction, and the only good reaction is expulsion. This is especially true of Cernovich and Watson. I had never heard of them until the trump campaign, and think it is more than a little likely that they just attached to the phenomenon of the reactionary right to further their own personal self interests. That is, increasing prominence to enhance sales of media and/or books (or bogus vitamin supplements in the case of infowars). They weren’t around when the reactionary right was much less famous and had much, much less glory. Richard Spencer was. He has seniority and has proven himself. If anyone needs to be disavowed and exiled, it is Spencer’s critics. The cause being treason.

I am going to be charitable though, because these folks, who have been misguided by the lugenpresse with respect to Spencer, have done some decent work exposing SJWs, the lying media, etc. I suspect this whole thing started as an impulsive and uncritical rant by Cernovich, who now is sticking to his guns despite his mistake being more than a little obvious. Why is he and others sticking to their guns? Ego. So many people feel the need to inject their own personality into the content and topics they discuss. They are their positions and vice versa. Cernovich, Watson, Vox, Milo, and a number of others at least partially generate a personality cult to help sell their brand and content. While I am quite sure that helps their bottom line, it doesn’t help ensure impartial appraisal of their own actions. And certainly won’t help them acknowledge a mistake like this. My suggestion is that Pride is a sin, and that egos should be swallowed, mistakes acknowledged, and we should all move on. The left is the real enemy.