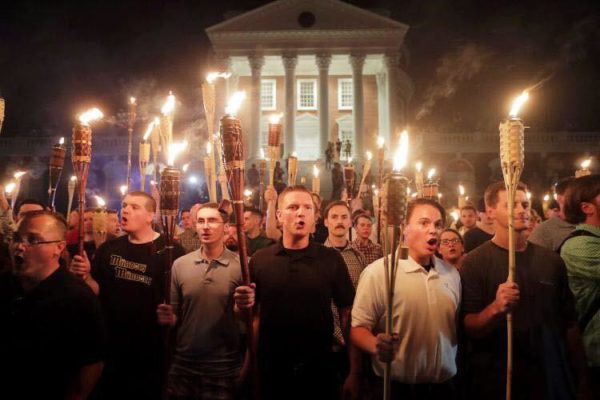 There was recently an alt-right rally and I suppose I should comment. Someone died after all. [update: It appears the person who died did so of a heart attack rather than being hit] Well, that is unfortunate. For some reason, a young guy decided to drive through a crowd of Antifa  protesters. He injured quite a few and one woman in her thirties died. The rightstuff.biz guys describe the events and their impressions here.

This really doesn’t look good for the right. However, if I were to make a bet, the violent leftist thugs were probably surrounding and beating his car with bats and otherwise acting very intimidating. There is some testimony to that effect. There have been past instances where other people were in this situation, and those who didn’t drive over the thugs often got dragged out of their vehicles and beaten or killed. Driving through a violent mob that could potentially kill is not the problem. His mistake wasn’t running over violent thugs. It was driving his car in the midst of them in the first place. He should have just parked his car off somewhere and joined the group of right-wingers, assuming he actually is a right winger. Either way, it is unfortunate that this event had to happen, but let’s be clear that the violent leftist thugs are more than 50% responsible for creating this situation. Also, I don’t think it is fair to blame Richard Spencer or the other organizers for this. They did not know the driver, they did not make the leftists attack his car, and they did not make the driver panic and ram a crowd. Other than not having public events, which is even less desirable in my mind, there is no way for them to stop crazy people from acting crazy.

Moving on from this to the event as a whole. A lot of people complain that is “bad optics.“* Or for those of us not trying to sound cool with edgy jargon, bad public relations.  They aren’t wrong. There is a lot of bad PR coming from this. However, I don’t think that is avoidable. The left has been gas-lighting White Americans for a very long time as their main tactic for gaining power, money, and influence. Without that they don’t have very much so it is natural they would attack any resistance to it viciously. Both physically and in words. They would have and will spin their own misdeeds and blame their enemies for it. Any event which featured white Americans standing up for their own side as a group can be expected to have the same treatment and have the same problems with PR. The best that can be hoped for is less bad PR rather than more. Could this have been done better? Maybe. But that would have only changed the degree of the problem rather than solving it. At some point, people are going to have to get up from behind their computers and actually assert themselves publicly. This is the reaction that is going to get, regardless of where or why it is happening. Since these actions by leftists aren’t avoidable, less worry about their occurrence is warranted. It is more important to assert dominance and determination than it is to stay hidden in basements so that no bad PR ever occurs. Eventually, hopefully, enough will be done and enough strength shown that politically correct censorship in the public sphere will simply fall into dust. You can’t make an omelet without breaking a few eggs. It remains to be seen whether this is a disaster for the right [I don’t believe so], a good thing for the right as evidence emerges of violence by leftists and corruption by the city [a possibility, will be true for at least some people], or something that is just forgotten by most everyone in a week and thus of trivial consequence [most likely in my opinion].

Most of the people who gravitate towards practical realism in societal organization (Neoreaction, parts of the alt-right) consciously acknowledge that speaking the truth is going to be deeply offensive to many and do so anyway. So why good “optics” seems to be such a big concern for some of them confuses me. For one, it is largely not possible to achieve given media entrenchment. It would be great to have, but if it’s not in the cards we might as well not worry too much about it. For another, focusing on PR and spinning narratives is a deeply deceptive practice and thus a province of the left. We are on the right because we don’t like what the left is doing. It doesn’t make sense to emulate what they are doing to gain power because then you really haven’t changed anything. All you will get is a different list of names lying to you. If we are going to sacrifice principles to gain power we might as well pack our bags and go home. At least in this instance. Speaking the truth assertively will cause bad “optics.” No ifs, ands or buts. We should accept that and continue doing it anyway. Just like we always have.

While that is being done, I have also suggested an alternative approach for those who can’t be reasonably reached by presentations of mere facts. And if not my specific suggestion, I think something might be achieved by treating refusal to accept obvious and unkind truths as a spiritual problem rather than a “we need more facts” problem because we honestly already have a super-abundance of facts. We should directly address the psychological issue of refusing to confront and accept truth rather than scratch our heads about facts not seeming to ever get through to some people.

There is definitely room for improvement in organizing for unite the right, as anti-dem clearly demonstrates, but that hardly makes this a cataclysmic event for the alt-right. After all, leftists still force just about everyone who works through bogus diversity training, among many other things, which is going to continue driving people to the right regardless of what happens at some protest event. Especially when the event falls away down the memory hole. Of course, I could be wrong and will accept that if it turns out to be true. For example, I doubt I have all  the important details which could very well force me to take a different position.

Lastly, I will leave you with a third perspective that is ominous and speaks of impending doom:

America’s ideological landscape is like the continent itself: transected by deep fault-lines at the irregular boundaries of rigid plates. Though crushed tightly together, these great masses seek to move in different directions, and so they strain relentlessly against one another. The pressure builds, and builds — until, sooner or later, it must release itself in a destructive convulsion. …

The plates press and moan and grumble. The water in the wells is rising, and muddy. Dogs and cats fidget restlessly. Farm animals are balky and skittish. Migraines are up sharply, and radios are on the fritz.

The ground began to tremble in earnest today. If you are the worrying sort, now would be a good time to start.

*Sorry anti-dem. You are awesome and make great points in that article, but I just really dislike that faddish use of the word “optics.”