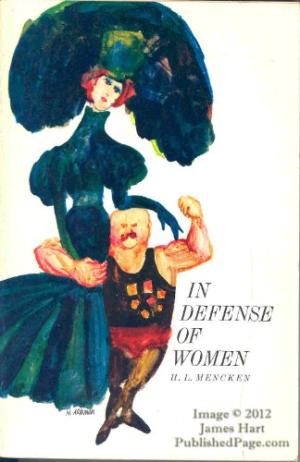 I have heard of HL Mencken, called by some the greatest misogynist of all time, talked about in a number of different places in the manosphere and in neoreaction. Specifically, the book “In defense of Women,” written in 1918, was recommended to me and so I decided to go ahead and order this book and read through.  I can’t say that I agree with everything he states in the book (when I am sure it is serious, rather than hyperbole). However, a few things he mentions are deeply insightful. For example, the book contains one of the best descriptions of hypergamy I have read (before the phrase hypergamy was even coined):

But here I rather depart from the point, which is this: that the average woman is not strategically capable of bringing down the most tempting game within her purview, and must thus content herself with a second, third, or nth choice. The only women who get their first choices are those who run in almost miraculous luck and those too stupid to formulate an ideal—two very small classes, it must be obvious. A few women, true enough, are so pertinacious that they prefer defeat to compromise. That is to say, they prefer to put off marriage indefinitely rather than to marry beneath the highest leap of their fancy. But such women may be quickly dismissed as abnormal, and perhaps as downright diseased in mind; the average woman is well-aware that marriage is far better for her than celibacy, even when it falls a good deal short of her primary hopes, and she is also well aware that the differences between man and man, once mere money is put aside, are so slight as to be practically almost negligible. Thus the average woman is under none of the common masculine illusions about elective affinities, soul mates, love at first sight, and such phantasms. She is quite ready to fall in love, as the phrase is, with any man who is plainly eligible, and she usually knows a good many more such men than one. Her primary demand in marriage is not for the agonies of romance, but for comfort and security; she is thus easier satisfied than a man, and oftener happy. One frequently hears of remarried widowers who continue to moon about their dead first wives, but for a remarried widow to show any such sentimentality would be a nine days’ wonder. Once replaced, a dead husband is expunged from the minutes. And so is a dead love.

One of the results of all this is a subtle reinforcement of the contempt with which women normally regard their husbands—a contempt grounded, as I have shown, upon a sense of intellectual superiority. To this primary sense of superiority is now added the disparagement of a concrete comparison, and over all is an ineradicable resentment of the fact that such a comparison has been necessary. In other words, the typical husband is a second-rater, and no one is better aware of it than his wife. He is, taking averages, one who has been loved, as the saying goes, by but one woman, and then only as a second, third or nth choice. If any other woman had ever loved him, as the idiom has it, she would have married him, and so made him ineligible for his present happiness. But the average bachelor is a man who has been loved, so to speak, by many women, and is the lost first choice of at least some of them. Here presents the unattainable, and hence the admirable; the husband is the attained and disdained.

I have used the phrase, “in despair of finding better game.” What I mean is this that not one woman in a hundred ever marries her first choice among marriageable men. That first choice is almost invariably one who is beyond her talents, for reasons either fortuitous or intrinsic. Let us take, for example, a woman whose relative naivete makes the process clearly apparent, to wit, a simple shop-girl. Her absolute first choice, perhaps, is not a living man at all, but a supernatural abstraction in a book, say, one of the heroes of Hall Caine, Ethel M. Dell, or Marie Corelli. After him comes a moving-picture actor. Then another moving-picture actor. Then, perhaps, many more—ten or fifteen head. Then a sebaceous young clergyman. Then the junior partner in the firm she works for. Then a couple of department managers. Then a clerk. Then a young man with no definite profession or permanent job—one of the innumerable host which flits from post to post, always restive, always trying something new—perhaps a neighborhood garage-keeper in the end. Well, the girl begins with the Caine colossus: he vanishes into thin air. She proceeds to the moving picture actors: they are almost as far beyond her. And then to the man of God, the junior partner, the department manager, the clerk; one and all they are carried off by girls of greater attractions and greater skill—girls who can cast gaudier flies. In the end, suddenly terrorized by the first faint shadows of spinsterhood, she turns to the ultimate numskull—and marries him out of hand.

This, allowing for class modifications, is almost the normal history of a marriage, or, more accurately, of the genesis of a marriage, under Protestant Christianity. Under other rites the business is taken out of the woman’s hands, at least partly, and so she is less enterprising in her assembling of candidates and possibilities. But when the whole thing is left to her own heart—i.e., to her head—it is but natural that she should seek as wide a range of choice as the conditions of her life allow, and in a democratic society those conditions put few if any fetters upon her fancy. The servant girl, or factory operative, or even prostitute of today may be the chorus girl or moving picture vampire of tomorrow and the millionaire’s wife of next year. In America, especially, men have no settled antipathy to such stooping alliances; in fact, it rather flatters their vanity to play Prince Charming to Cinderella. The result is that every normal American young woman, with the practicality of her sex and the inner confidence that goes therewith, raises her amorous eye as high as it will roll. And the second result is that every American man of presentable exterior and easy means is surrounded by an aura of discreet provocation: he cannot even dictate a letter, or ask for a telephone number without being measured for his wedding coat.

Mencken has a lot of good passages in his book as those two listed above, so I highly recommend reading the whole thing (free online). I think his discussion casts a lot of clarity on the relations between the sexes. It may be that many readers might object to average men being described as romantically idealistic numbskulls, but keep in mind that it is unlikely that the the average man would have made it to the point of browsing neoreactionary blogs and reading HL Mencken in the first place. He isn’t describing such above average men (you my dear readers), but strictly the average, and I think his description is accurate.

At any given level of intelligence, it is likely that the women excel at social engineering and manipulation relative to men of similar intelligence. Men’s talent advantage tends to express more in mechanical fields at the cost of social acuity. However, what we see is that the greater social acuity in women does not result in their increased happiness, but in increased dissatisfaction in their romantic lives. That they are keenly aware and constantly comparing and contrasting the men who make up their potential partners even with fictional characters leaves many women in a state where they simply cannot be fully satisfied with whatever man they happen to actually attach themselves to. This is a moral failing which many, if not most, women are susceptible. Through most of the book, Mencken regularly highlights the greater cunning most women demonstrate in their social dealings but the implication is that these gifts are used in devious and disingenuous ways; ways that cause problems for both the men and women involved and for society at large. More often than not, women are just as much a victim of their own cunning and deception as the idealistic men that get manipulated. This is the source of the controversy about whether the book is one in favor of women’s rights or a tongue in cheek criticism of the moral failings of women.

The old standards of marriage were to a large extent designed to mitigate the hypergamous tendencies of women since they often extend past the point of pragmatism into irrationality and immorality. As is readily apparent by the divorce rates and laws that exist today in the west, it is quite clear that women can’t be depended on to act loyally towards their husbands (all of which are “second raters” compared to flights of fancy) or for them to willingly accept the weight of responsibilities that should be concomitant with their vows of marriage. Even the system of arranged marriage starts to look better as it prevents the mechanism of hypergamy inherent to women from playing any role.

EDIT: Here is another good discussion of Mencken.