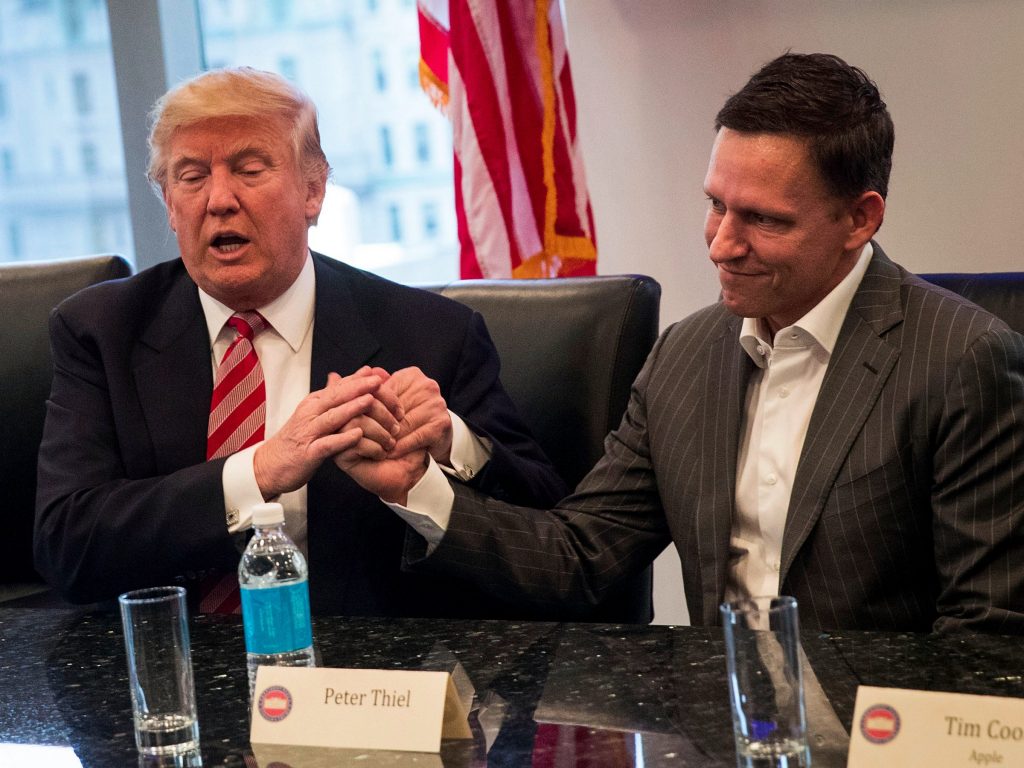 
It’s not clear why Trump entertained Zuckerberg and Thiel, who was a major donor to the president’s 2016 campaign and one of the most outspoken conservatives in Silicon Vally.

No one knows what exactly they talked about or why, but I would like to repost my article from 2016, which encouragingly suggested there is some neoreactionary influence reaching the president through Thiel:

Peter Thiel, a major backer of Neoreaction founder Curtis Yarvin’s (Moldbug’s) Urbit project, gets a seat right next to Donald Trump at a tech company meeting with the president elect. See above picture. Thiel has been a supporter of Trump for some time and even gave a speech for him in October. And before that at the republican national convention. He is also more or less an official advisor of Trump.

To add to my earlier post, in leaked emails, Moldbug said the following to Milo Yianopolas:

Yiannopoulos’s knowledge of Thiel seemed to come secondhand from other right-wing activists, as well as Curtis Yarvin, the blogger who advocates the return of feudalism. In an email exchange shortly after the election, Yarvin told Yiannopoulos that he had been “coaching Thiel.”

“Peter needs guidance on politics for sure,” Yiannopoulos responded.
“Less than you might think!” Yarvin wrote back. “I watched the election at his house, I think my hangover lasted into Tuesday. He’s fully enlightened, just plays it very carefully.”

Anyway, it does make you very curious what Trump, Thiel, and Zuckerberg were discussing. Perhaps facebook will be improving in the near future.

Edit: I just noticed a synchronicity that today when I bring all this back up, President Trump is awarding the Claremont Institute the national humanities medal. Claremont published the famous “flight 93 election” and is the first place Moldbug has written in years. It later turned out the “flight 93 election” was written by Michael Anton, who apparently is also friends with Moldbug and received a copy of Bronze age Mindset from him.