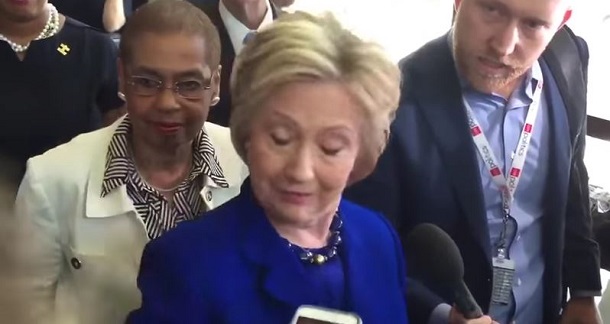 A quick post for today. Hillary’s health has been a topic of some controversy over the last few weeks and wikileaks recently released an email showing research by Clinton staff into a drug used for parkinson’s disease. I suppose that could be a likely explanation for some of the odd behavior seen in some videos of her giving speeches or in other public appearances. Mike Cernovich gives a well researched timeline with links of the chatter on her health. Below is a video of Hillary’s head bobbing:

Here is a video of Michael J. Fox giving an interview and talking about his experience dealing with Parkingson’s

Seems pretty similar to me. In related news, CNN canceled the show of a doctor for conceding that Hillary probably is having health issues. That is no beuno at the Clinton News Network. I think he should be added to the pressured and purged list, although I don’t think handle is actually maintaining it anymore.  The ending of this show definitely seems like the cathedral in action.

I suppose it is possible that this drug was only for “decision fatigue,” or whatever other “illness” democrats want to make up, but it really doesn’t look good for Hillary, or the MSM for denying it for so long.

Moving on. Last year I wrote an article comparing the satirical movie PCU to the events unfolding at the University of Missouri. Thanks to its pandering to blacks then, the University of Missouri was hit pretty hard in the wallet this semester. The freshmen enrollment at their flagship campus went down by around 25% or 2600 students compared to the previous year which is expected to cause a 32 million dollar shortfall in lost tuition. Staying politically correct can be quite expensive it seems! I wonder if any other schools are taking note? I included the description of what supposedly started the protests below (spoiler alert, it is really stupid, and involves literal shitposting). You can read the full PCU article here.

There were supposedly two big triggers, although I have to admit it is convoluted and different articles say different things. In one that I have seen, some black guy got mad because allegedly someone yelled “nigger” at him while driving by in a truck. I actually sympathize with him. I really do. I once had some asshole in a truck pass as fast and as close as he could while I was riding a bike and the passenger screamed out his window right as they passed me. I nearly had a heart attack. That was, after all, extremely dangerous for me if I had fallen or he had hit me. As in real danger, unlike someone yelling nigger but doing nothing else otherwise… He then got stopped ahead at a light, though, and I broke his mirror off as I myself ran the light and went on a trail next to the road in some woods where they couldn’t follow in the truck and wouldn’t keep up without a bike of their own. It was a nice revenge, and I don’t feel bad about it. What I am trying to say here is that I know what it is like to be the recipient of grief from an obnoxious asshole in a truck and can even understand why this guy would be mad. However, I can tell the difference between a singular asshole in a truck who needs an ass-kicking (or just ignoring) from a society wide problem of discrimination warranting protests, hunger strikes, and university president resignations. [People do protest for more bike friendly regulations etc, and I have never taken part in such a demonstration]

The other important incident is something I would expect from the onion. Apparently an unknown person went into a unisex bathroom at one of the dorms, shat on the floor, smeared shit all over the walls and door handle, then as a cherry on top (poorly) drew a swastika with their own poop: 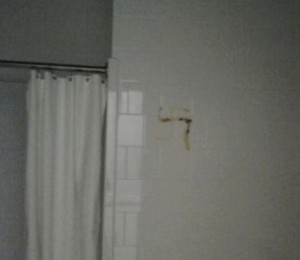 I am not going to lie. When I first read about this, I laughed. I don’t mean a mild chuckle either, I mean a deep gut laugh that carried on for some minutes. I find this hilarious. Not so much that poop was spread along the walls (which is pretty immature), but the fact that thousands of people have completely gone ape-shit (chimped-out?) over poop on the walls. Like, how is this the reality we live in? How is it people don’t just step back and think “we are talking about poop on the walls, maybe we shouldn’t take this or ourselves so seriously?”

Now, this could have been a false flag where some deranged SJW carries out crimes in an effort to stir up a hornet’s nest of other SJWS, like with the “black church burnings” also happening in Missouri and which probably has contributed to the current growing craziness. Or the fake “confirmed KKK presence” also part of the absurd events going on at Mizzou. As detailed in the previous church burning link, it turns out that a black man was pretending to be a racist white burning churches because he just wants to stir up shit I guess (that is, he wanted to generally increase racial animosity). Of course, I doubt there was any reflection to strike the burnings off the list of white “crimes” after the truth was revealed. That doesn’t fit the desired narrative after all.

As far as the poop swastika goes, this is what I believe happened assuming it wasn’t a false flag. Someone, probably male between the ages of 18 and 21, got drunk and/or high, came back to the dorms late and had to take a shit. He was feeling mad or mischievous or antisocial or something and decided to make a big mess. He then proceeded to shit on the floor. Or perhaps he was so messed up he just shit on the floor for drunk reasons with no particular purpose [it happens…] then decided “I went that far, might as well roll with it. It gives me some ‘good’ ideas….” He then proceeded to spread the shit everywhere and thought it would be funny to make a swastika while he was at it. The only purpose behind his actions were to make people mad and disgust them by breaking taboos so why not? (I seriously, seriously doubt a real Nazi would use shit as his artistic medium) He was after entertainment rather than interested in making a point, as most trolls are. Well, I doubt he expected his shit trolling to escalate into world wide media coverage. Who would? Somewhere there is a poop brigader going “oh shit, my shit really caused a shit storm.” No troll could possibly imagine their extremely intoxicated decision to draw a poop swastika would result in weeks of protests, a hunger strike, complete stifling of free speech, and high ranking university officials resigning. Who would expect that level of over-reaction to some poop spread on the walls of a dorm? As cynical as I am about leftists and how crazy they are, even I wouldn’t have guessed that.