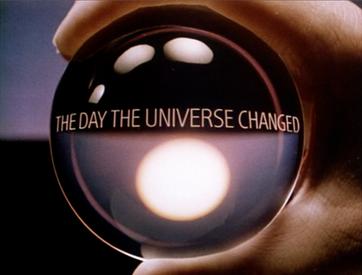 The day the universe changed is also created by James Burke and follows a similar style as that documentary. In this one, though, it tends to focus on how the development of a revolutionary big idea has tended to shape our understanding of the world and/or universe. Hence the title. Honestly, the concept for the series leans a little too relativist in that respect for my liking, but not in an extreme way that is common in post-modernism. Its true enough that new data can change your perceptions about reality, but that doesn’t mean there isn’t or wasn’t an objective reality that doesn’t give two cents for what you happen to be perceiving, right or wrong. I would think that Burke himself would basically agree with this point, while also stating that for us, at least, these changing perceptions have had very important consequences. True. Anyway, it is a mainstream documentary so it tends to have the same problems you can expect from most of those, but since its old (1985), generally pro-western civilization, and vaguely conservative leaning, as a result, it is quite easy to look past that and enjoy a well produced documentary the likes of which you are unlikely to find produced today. Please enjoy the ten episodes linked below:

Episode 1: The way we are: It started with the greeks.

Episode 2: The light of the above: medieval conflict – faith and reason

Episode 3: Point of view: Scientific imagination in the renaissance.

Episode 6: Credit where its due: The factory and marketplace revolution

5 Replies to “Western Civilization documentaries: The day the universe changed by James Burke”