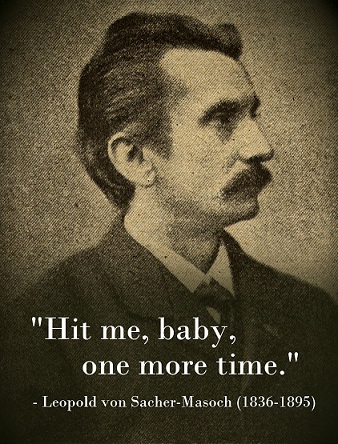 Misandromasochism is a combination of the words misandry and masochism.

Misandry is the hatred, dislike, contempt for or ingrained prejudice against men and/or boys

Misandry itself is a combination of old English Mis which means wrong, bad or erroneous and Andro which is Greek for male. Misandry therefore literally means bad men.

Masochism is a bit more interesting. It was coined by Richard von Krafft-Ebing to describe the perversions of author Leopold von Sacher-Masoch; Masoch being the root of masochism. Leopold liked to be sexually submissive and treated like a slave by women wearing furs among other things. His most famous piece of his writing, a venus in furs, described in detail this preference of his and was representative of his real life experiences. Unsurprisingly, the effeminate Masoch was also a utopian, a socialist, and a feminist.

While writing the post on missing links that connect Christian theology to modern day attitudes, I mentioned the similarities between total depravity and ethnomasochism. I suspect that Misandromasochism is a related phenomenon. It is absolutely true that many men have unreasonable burdens thrust upon them by the state. However, there are also a significant number of men who still support this system which is clearly against their own interests.

In addition, I have met men in in my personal life who when faced with divorce and the theft of their children, willingly give large sums of money to their ex-wives without any compulsion of the state. In one representative example, the ex-wife got a court order demanding even more wealth transfer after already receiving a significant amount of money each month. The court did not even consider the previous money he had already given her so he had to pay twice for that time. I can’t describe this man’s behavior prior to the court order as anything other than misandromasochism. Men who succumb to the pressure of “man up” (even from the right) and act in ways that are detrimental to themselves (usually for the benefit of women and children) are misandromasochists. Men should only sacrifice their interests when society provides them the incentives and rewards that are due for that sacrifice. Misandromasochism should be resolutely rejected as a organizing cultural principle.