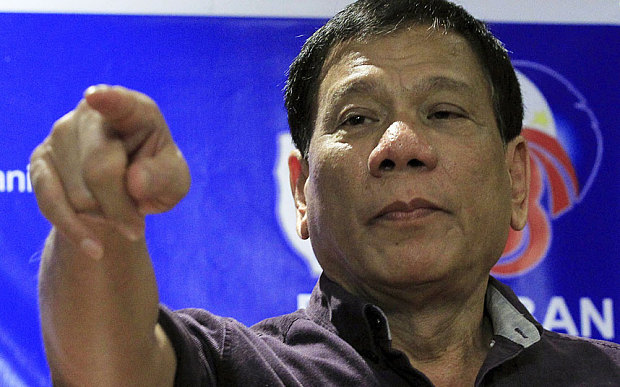 Recently Jim wrote about the future president of the Philippines, affectionately known as Duerte Harry because of a slight similarity of his last name to the first name in the movie dirty harry as well as his similar approach to crime as the title character. Namely that the only good crook is a dead one. Duerte Harry is heavily criticized by progressives enthralled to anarcho-tyranny because as Mayor of Davao he wasted no time with criminals, he just killed them.

As Mayor of Davao, [Duerte] has been accused of running vigilante death squads that have killed more than 1,000 people.

On the other hand, average law-abiding people obviously love him because his method is undeniably (and unsurprisingly) effective. A criminal can’t commit crimes when they are six feet under. Would-be criminals start to have enough fear to think twice. Therefore, once dangerous neighborhoods become safe for people of moderate means because everyone committing crimes is dead or in hiding, average people become happy. That kind of competent governance has led Duerte Harry to a landslide victory in the race for the presidency of the Philippines.

During his campaign he promised to end crime in the ENTIRE country within six months. If it were anyone else I would be skeptical, but he has a successful track record and enough right-wing death squads that he just might make this a reality. Here is a rundown of his campaign:

Philippine President-elect Rodrigo Duterte has vowed to end crime in his first six months in office through mass executions of convicts and eliminating police corruption… While on the campaign trail, the elderly politician enraged critics and hypnotized fans with promises to ignore human rights laws and solve crime by killing tens of thousands of convicts.

I must admit I am impressed. Part of his platform was willfully ignoring (progressive) human rights laws and a plurality of the country loved him for it. Can’t say I am all that surprised. If you have ever been in a bar that is mostly blue collar and talk about some crime or another, almost everyone will say that the S.O.B. who did it should just be killed and be done with it. This is probably true all over the world. If a person lives somewhere with a high crime rate especially, the idea of getting even with the thug who victimized them is probably high on their wish list. With a president like Duerte Harry, the dream just may come true. If the president kills tons of criminals, he just might get that specific criminal you would like to see get his karmic reward.

The only people who don’t think this way are typically rich liberals who can afford to isolate themselves from the trash. Rampant crime doesn’t bother them as much since they don’t have to live through it, and getting that smug feeling of self-righteousness is more important to them than the well-being of decent people unable to separate geographically from the trash.

Anyway, I would like to point out that Duerte Harry’s plan has plenty of advantages beyond just the immediate lowering of the crime rate. It is actually a profoundly eugenic policy. The personality that makes for a risk-taking criminal also often generates lust in many women. A criminal has high time preference and given his natural seductive talents, is likely to father multiple children by multiple women. And to become scarce when it is time to actually raise them. Do all criminals have this ability? Probably not, but criminals probably have a higher proportion of this ability than the average of the general population. By killing a criminal, you prevent him from reproducing ever again. You actually prevent any number of criminals from ever being born. Fantastic. You also can reduce the rate of single motherhood by removing bad choices from her vicinity, and reducing single motherhood has all sorts of positive benefits itself. Killing violent criminals is a likely reason why the west is (or was) relatively more civilized than other places. Our ancestors really liked their executions.

There is one last thing I would like to note about Jim’s post, and that is to confirm his appraisal of Duerte’s death squads compared to Western police forces. Basically he found that he felt perfectly safe around the death squads because they were highly disciplined and focused on actual criminals. In the West, on the other hand, decent, law-abiding citizens regularly find themselves fearful or wary of police even when they are quite certain they are doing nothing wrong. I have felt this way plenty of times and regularly avoid officers just in case they decide to harass me for the hell of it. I feel this way because it has happened on plenty of occasions. Especially in college, but after that as well.

For example, if you have a beer or two you have to think twice about walking out of your door. And I am not defending going out completely sloshed, I mean only a beer or two. A police officer is not unlikely to slap you with a 3-400 dollar fine even when you are just trying to go about your business. I remember one time in college I was going to a party and had not drank anything. At least not yet, and neither had my friends that were with me. As soon as I arrived officers quickly ran up to us gave all my friends and I tickets for drinking. We hadn’t had a single beer. They were in it merely to harass, annoy, and maybe get some easy income for the city. They were apparently upset that the people already in the house wouldn’t let them in, so they took it out on us. The whole situation was crap. Meanwhile, on the other side of the city you have a (minority) area overloaded with violent crime and hard drug use that never seemed to get any better . For some reason the police couldn’t do anything about that (anarchy), but they had plenty of time to pick on college students (tyranny). We were easy targets.

After college I spent about 2 years living, working, and traveling in south east Asia. I never once felt the same sort of dread at seeing a police officer in any of those countries. The simple matter was they weren’t going to bother you unless you were actually visibly doing something wrong, and they were very consistent about that. There is only one example of an exception to this rule and that is that sometimes you could get your scooter pulled over and they would check it for drugs, or they might come into a bar and check it for drugs. In the whole time I was there I only saw this happen twice, so about once per year, and only in extremely touristy areas. Outside of those areas it was unheard of and I never saw anyone harassed by police undeservedly. In fact, the only time I saw the police in action was when a homeless man set a truck on fire and he obviously had it coming. I personally never once had trouble with the police, even if I saw other people being checked.

Now, I won’t skip over the important specific example, because it was messed up, but you have to make a comparison to what might happen in the states under similar circumstances. However, I am not going to get too into the details. And the story is second-hand anyway since I wasn’t immediately around when it happened. Some people I had met and was hanging out with generally, if not at this exact moment, got arrested for smoking marijuana. The police forced them each to pay somewhere between 200-500 USD in bribes to get out of the ticket. One guy got really mouthy and they made him pay the bribe, then picked him up the next day and made him pay it twice. That ended his trip and he had to go back to his country of origin.

So they made them pay bribes, which is corruption and sucks right? Well, ya it does, but what would have happened if you were arrested in the US?  My brother has been arrested for smoking pot several times and I watched him go through all of the following types of BS at one point or another until he finally wizened up and quit. The fine you would pay would easily be 300-500 or more (sometimes they add a yearly payment on top of the initial fine that lasts several years), you would have to do between 20 and 100 hours or more of community service, you probably would have had to pay for some “drugs er bad M’kay” class which would waste a few hundred dollars and up to 20 hours of your time, and you would likely have a permanent mark on your record that would make securing future employment far more difficult. To avoid the permanent record, you could be put on probation for a year which requires regular visits to a government office for drug tests. Failing that and other harsh restrictions could lead to bigger fines or jail time. It could easily take years of annoyance to finally stop having to interact with the cursed legal bureaucracy. If you had gotten mouthy like the guy in the story (and apparently he was pretty bad according to his friends) you might expect to get tazed or even shot in the US. Now tell me, which of these things sounds worse to you? Paying a one-time fee and never having to look back, or years of wasted time, money, and hassle as well as bleaker employment options? The kind of crap they force people to go through over a relatively harmless plant is clearly an example of the tyranny part of anarcho-tyranny.

There is no contest. The one example of BS, which I never experienced personally and is honestly easily avoidable if you take simple precautions, actually has far preferable resolution conditions than the equivalent in the states. Not that I want to laud corruption, but if you are going to have it the system over there is superior. In SE Asia corruption is available to all. If you are of modest means and you get caught committing some minor infraction, such as smoking pot, you can pay a bribe just as easily as the wealthiest man in your city to avoid interaction with the legal system and any sort of permanent record. In most of the US this simply isn’t possible unless you are well-connected, and even when it is it is far more expensive. I would honestly argue that the corruption there is in many ways more fair to the middle class and lower than the rigid legalism of the US. It is certainly far easier to move on with your life after something minor happens.

Now, don’t get me wrong, I am not condoning drug use. A lot of drugs can cause a lot of harm if over-used. In the case of pot, however, its only real problem is that it makes people forgetful and lazy. That can be a problem yes, but not one I think the legal system needs to be involved in addressing. And even being involved it shouldn’t be more than a minor fine and that is it. Of course, it wouldn’t be the US if the state didn’t harass relatively decent people for the hell of it.