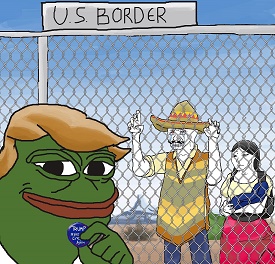 I have been preoccupied with other matters for a while, and that probably won’t change in the immediate future, but I thought I would take a break from my recent absence to comment on the Trump victory. There is a lot of good feelz out there in reactionary circles about it, and I will admit the feeling is somewhat contagious. It is nice to finally win one after so long watching everything just get worse and worse with no apparent relief until the appearance of the Trump candidacy (and now future presidency). There is a hope that there is more to all this stuff we have been doing, and there seems to be a real possibility that there is more to living in the west than mere fatalism. Maybe we don’t just have to accept that the west is doomed.

Unfortunately, the above paragraph just about uses up my ration of optimism for this year. The truth of the matter is that Trump is not a reactionary, and there is no reason to think that he will go anywhere near far enough to correct the massive dysfunctions infecting our institutions and culture. Even if he does everything he has talked about, to the letter, most of us would agree enough still wouldn’t have been done. And I doubt he will go as far as he said he would on the campaign trail anyway, though I expect him to do something in that direction.  Let’s not forget that he will have career bureaucrats trying to block and ruin his every action even if he does try to do everything he said he would.

Our demographics are absolutely swelling with hostile minorities who falsely believe that white men are to blame for their own problems. Trump isn’t going to fix that distorted belief, and the problem is still getting worse. The distortion itself continues to become more extreme, and the number of minorities around who hold it increase at a high rate because of both immigration AND birthrates. Stopping immigration will not stop high birth rates. It will continue to get worse even if he halts all immigration the day he is inaugurated.

In addition, even if he is a natural alpha, to borrow red pill terminology, I don’t see any indication he will push for changes in law that restore more traditional family structures and end the tyranny of feminism. Such things don’t harm natural alphas much anyway. Feminists may have suffered a blow to morale, but that is temporary and ultimately meaningless. They will return with renewed and redoubled vigor, eventually.

For both of these tenuously allied groups, there is a future election waiting to be won. Especially since demographics are heavily in favor of minority factions. At that time, they will pick up right where Obama left off and make the spirit of a Hillary presidency a reality, just at a delayed date and with different names to attribute it to. This election has at best delayed the agenda of the far-left, if that. Some day they will come back and use the institution of democracy to further that agenda.

Hence we find our real enemy. The institution of democracy is what will be used to continue the dispossession of productive whites and traditional families. If not today, then in four years, or eight, or twelve. It doesn’t really matter exactly when, because the clock is ticking and it is only a matter of time. When, not if. There is going to come a point where European stock all over the world will have to accept that the number of warm bodies at the ballot box is an insufficient justification for rule. Otherwise, we will be destroyed by vindictive incompetents. We will have to stand up and yell: “I don’t care how many billions you number your horde, I will not be ruled by you and yours under any circumstance. I will not allow you to have any say over myself, my family, my people or my nation. Get out.”