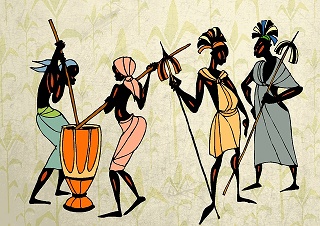 I haven’t said much on the the shooting of Michael Brown in Ferguson, Missouri, but I have been following it. In short, a young (and large) black man named Michael Brown was shot and killed by police officers. Most of the available evidence suggests that Brown was a thug and criminal (here is a video of his robbery immediately before his death [alternative]). Considering his previous actions and history, there is a pretty good chance that the officer’s story is correct. Brown attacked them and left little choice but to open fire. A regrettable turn of events, but Brown is largely responsible for his own fate by virtue of his poor decisions.  Unfortunately, many blacks and progressives do not see it that way. Given the facts available, it is hard to understand how the situation could be interpreted in any way that doesn’t acknowledge the role Brown’s actions had in his death.

Hard, but not impossible. Evolution (or evolutionary psychology) doesn’t always favor pure rationality. In this case, thedish loyalty or tribalism outweighs the facts on the ground on what is fair between the two individuals. When two individuals from different groups or tribes come into conflict, from an evolutionary standpoint it is likely that members of a tribe stand more to gain from unconditionally aligning with another member of the tribe against outsiders even if the outsider is objectively in the right. Through this lens, it is much easier to understand why no matter how obviously a black person is shown to be in the wrong, you will always have droves of other blacks aligning with him/her unconditionally and trying to convince everyone else of the tribe members innocence. This course of alliance making is true of most human groups. The notable exception seems to be white liberals. HBD chic suggests that a large fraction of whites are exceptions from tribalism because of past extensive out-breeding. With this unique heritage that now seems to have become pathological, it can be seen why progressives come to ally with the group outside their thede. With less loyalty to others who are clearly related to them, the instead rely more on cultural cues (progressivism) to signal to and find other members of their thede who may or may not be closely related.

In any event, to get to the title of this post. The parents of Michael Brown recently were allowed to address the U.N. on the death of their son despite all evidence that suggests Brown was no martyr. This would be risible if it weren’t a symptom of extreme decay in our civilization.

The media, as is typical with racial issues, at best only shows ambivalence towards possible guilt by minorities:

Accounts differ as to what led to the August shooting of Brown, an unarmed black 18-year-old, by a white police officer.

“Accounts differ” is quite a stretch. They have video evidence of Brown committing a robbery immediately before he was detained. That doesn’t discourage Brown’s parents from making calls of action:

“We need answers and we need action. And we have to bring it to the U.N. so they can expose it to the rest of the world, what’s going on in small town Ferguson.”

Of course, they want the officer who was attacked to be immediately arrested regardless of evidence in a classic case of tribalism. What kind of action are they looking for?

[The parents want] an end to “racial profiling and racially-biased police harassment across the jurisdictions surrounding Ferguson.”

Blacks don’t commit more crimes on average, it is just discrimination…. How might this “discrimination” be solved?

[The US department of Justice] “must conduct a nationwide investigation of systematic police brutality and harassment in black and brown communities, and youth in particular. Methodology and findings of this investigation must be made publicly available.”

So the tax money of law abiding citizens must be used to concoct excuses whole sale for underclass, and especially black underclass, criminals. I think I could imagine better ways to spend tax money than imagining stories which are meant to keep criminals out on the streets.

But wait, there’s more! The Brown’s weren’t acting by themselves. In fact, one can wonder if they had much to do with their appearance at the UN at all. Low SES people don’t generally have the time or connections to garner such an audience or to draft political speeches. So who helped them?

The delegation that organized their trip said the couple would read from a statement submitted by the Brown family and organizations called HandsUpUnited, the Organization for Black Struggle, and Missourians Organizing for Reform and Empowerment.

What a wholesome line up…. Unsurprisingly,  Marxists and black nationalists are milking this situation for everything it is worth, which is surprisingly more than I would have guessed. I imagine they probably talked or possibly pressured the parents into doing this. I wonder what the parents thoughts would have actually been if the media exposure and special interests groups hadn’t interfered.

I feel bad for these parents. They lost a son and instead of being allowed to come to terms with what he did wrong to get himself killed, they are being fed a bunch of Marxist lies about racism and class struggle which can only serve to fuel their bitterness and hatred for many years to come, if not for the rest of their lives.

If you are interested in more thoughts on the Ferguson shooting from neoreaction, here are some other posts:

Why didn’t they shoot

The myth of Ferguson

One Reply to “Tribal posturing: Parents of Michael Brown testify before UN”