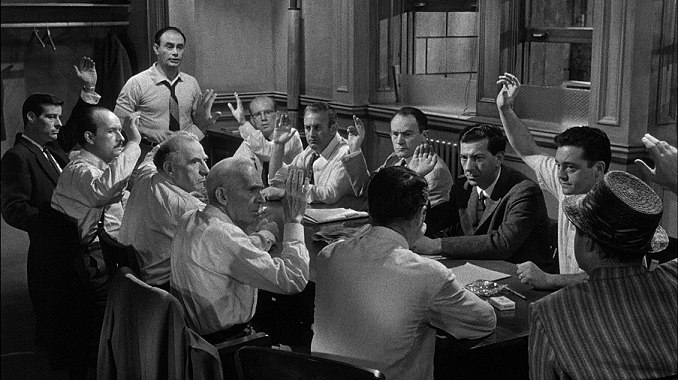 [Spoiler alert] I recommend you watch the movie before reading this review, which includes a summary. If you have already seen it or don’t care, read on. It is currently available on Net Flix.

12 Angry Men is about a jury of twelve (all white) men who must decide whether or not to convict an 18 year old hispanic boy from the slums of murdering his abusive father. If they convict him, then there is a mandatory death sentence for his crime. The events of the night, though never defined very clearly, go as follows:

The majority of the movie takes place in the jury deliberation room and follows the unnamed men as they discuss the evidence and testimony of the case. It starts out with 11 of the 12 men being thoroughly convinced that the boy is guilty, but the one dissenter (the protagonist played by Henry Fonda) is progressively able to convince the other men that there is a reasonable doubt of the boys guilt. Most of the dissenter’s doubt focuses on the fallibility of human memory in the case of both the witnesses and the boy.

Some, but not all, of the pieces of evidence they consider:

Sometime when I was in high school I was in a class that watched 12 Angry Men, rightfully considered a classic film. I vaguely remember my impression at the time was of surprised admiration. The fact that a black and white film could be enjoyable and impactful was somewhat unexpected to my shallow 15 year old self. Of course what really struck me, and presumably everyone else who likes the movie, was how close the jury came to carrying out an “obvious” miscarriage of justice. The portrayal of the situation by the movie was that prejudice and human fallibility were conspiring to condemn a young boy to death. As such, it was only just that he should be found not guilty. At least, that was how 15 year old me felt. How I was supposed to feel I guess.

I recently watched this film again and I now take the message of the film with a large grain of salt. As I have grown older and wiser, and also more experienced with neoreaction, it is easier to spot the undeniably progressive stance of the film. 12 Angry Men is the quintessential artistic expression of the progressive attitude toward the criminal justice system. The film itself was made in 1957, which was a time at an early stage of progressive reform of the courts. These reforms, which were implemented during the 50s and 60s, led to a huge spike in criminal activity during the 70s and early 80s. The reforms made it much more difficult for prosecutors to actually convict real criminals at trial. After all, it is better that 99 criminals go free than 1 innocent man goes to prison, right? Well, apparently not. Legislatures and prosecutors reacted to the surge in criminality created by these reforms by putting into place the draconian penalties and mandatory minimum sentences that allow prosecutors to scare 97% of the accused into accepting plea bargains to avoid the extremely harsh sentencing that would result from a jury trial conviction. For more on the changes that have taken place in the criminal justice system over the last 60 years or so, I recommend Handle’s review of “The collapse of American Justice” (and of course the book itself).

One of the most striking things I noticed when watching the movie was the easy association it made between the progressive attitude toward the boy, as embodied by Henry Fonda, and the church. Near the beginning of the film, one of the other jurists repeatedly paints Fonda’s character as a progressive Christian through sarcastic comments about his position such telling him to stop “giving a sermon” and asking if he also wanted them to “throw a quarter in the donation box.” Like the article “American Malvern,” 12 Angry Men comes from a time before progressivism had fully divorced from its Christian roots. That the audience would understand that progressive attitudes were associated with mainline Protestantism was simply taken for granted. No explanation necessary. This point was further hammered in by the same character later pejoratively calling Fonda’s character and the other jurists he had convinced “bleeding hearts;” a common slang for liberals and social justice advocates. “Bleeding Heart liberal” itself was likely coined as a reference to the bleeding heart of Jesus, which further underscores the shared cladistics of social justice liberalism and Christianity.

The accusing jurist himself, along with 2 or 3 other jurists to a lesser degree, is an interesting example of a caricatured archetypal conservative. Where the progressive leaning jurists are portrayed as calm, reasonable and objective, the “conservative” jurists are portrayed as emotional, angry, and prejudiced in order to create as polar a dichotomy as possible. In other words, good and evil were clearly defined by the exaggerated character and personalities of the individual jurists. This was especially pronounced in the attitudes written for the right leaning jurists towards immigrants and other ethnicities, which seems to be an early example of anti-white “anti-racism”. That is, the audience is made to feel antipathy towards the obviously negative personalities of the white, conservative jurists with illiberal opinions by associating those opinions with the absurd and flawed characters. For example, the “bad” jurists angrily referred to immigrants and minorities with disdain through terms like “they are just like that,” “that’s how they are,” and “that’s what people from the slums do”. Never mind the fact that such observations aren’t completely irrational, the point was to paint the picture that anyone who might use such information to help them decide a case is just as evil as this caricature through the association of flawed personalities with quick and prejudiced judgements. As illogical as such an association is, the film succeeds masterfully at this point.

It was this portrayal of the personalities of pro-guilty (IE conservative) jurists that I found to be most bothersome. In the most notable example of ad hominem via caricatured conservative, one jurist was given a back-story of conflict with his own son. He apparently was a hard father who engaged in a savage fight with his boy when he was 16. The boy had left and never spoken to his father again for many years. This bad father thus projected his bad situation onto the accused boy and associated the accused with his own disappointment and bitterness he experienced with his son. “Bad” was determined as much if not more via synthesized character attacks against the archetypal conservatives as it was by synthesized doubtful evidence. Surely this emotional appeal has little to do with jurists, conservatives, or justice in reality. And yet, we can see how effective it was on influencing the average person by the prominence of the movie in cultural history and the ultimate success of the progressive reformers to change the system.

Although this is a well made film and worth a watch, it has to be understood in the context of the times and especially the progressive ideologies of the writers. Being fictional, it is easy to simply manufacture doubtful evidence, testimony, and flawed personalities of jurists. Within the context of the reality created by the film, the progressive message does indeed seem right and just. However, a better way to judge the film is by the real world consequences of the progressive ideologies it embodies. Considering the sorry state of our modern criminal justice system, history should not remember this film anywhere near as favorably as it currently does.