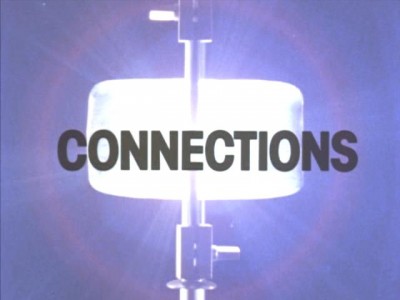 In my last post, I embedded videos for all thirteen parts of Kenneth Clark’s Civilisation series. A great documentary. Its focus was on changes in art, philosophy, and architecture in the west over time since the middle ages. In this post, I provide a link list to the 10 episodes of Connections 1 by James Burke. Connections is essentially a chimera of science and history that traces technological advances and their effects on civilization throughout history as well as socio-political developments that contributed to the spread of technologies, showing non-intuitive connections between seemingly unrelated inventions and history. While it isn’t strictly focused on Western civilization, most, but not all, key inventions and changes took place in the west so it is de facto a western civilization documentary for the most part. I would say that both this and Kenneth Clark’s series are equally good, however, I strongly prefer considering history through the lens of technological development personally. As such, I like this series a bit more. Also, this isn’t the only edition of this series either. Two more versions came out in the 90s, connections 2 and 3. At some point in the future, I will try to compile links lists to those as well.

Its also interesting to note the amount of technological development which has continued since this documentary came out. We have come a very long way even from 1978.

if you notice at some future time that one of the links is broken please let me know so I can fix it. Chances are I won’t immediately notice a broken link on this page so doing this would be very helpful. You can leave a comment at the bottom of the page or message me on Reddit, gab, or twitter.

Episode 2: Death in the morning

Episode 6: Thunder in the skies

Episode 8: Eat, Drink and be merry

Episode 10: Yesterday, tomorrow and you