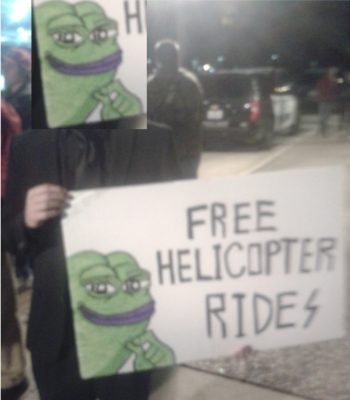 Richard Spencer gave a speech at Texas A&M university yesterday, which I am sure many of you have heard about. I live within several hours of A&M so it was a good opportunity for me to both see Spencer and a Shitlib rally in real life. I invited Brett Stevens to join me as well, so I also got to meet another dark enlightenment writer in real life for the first time as well. We got together a bit early and had a bit of dinner while discussing everything we hate about the modern world. It was great. Of course, I also went to the after party to talk to all the crime-thinkers in attendance including Spencer himself. My phone had died at that point, unfortunately, so I only have some (shitty) pictures from earlier in the night. Mostly of the protests occurring outside. I figured I would share them. Here is the speech itself:

Some Indians with a dot, I would guess, holding up a Martin Luther King quote. It is a nonsense sentiment for several reasons of course. Nothing in the laws of nature say we have to get along with anyone, or tolerate their close proximity. Historically, the answer to diversity conflict has been one side exterminating the other. Without consciously led change in direction towards peaceful separation, it is obvious that this is the course we are heading for. It isn’t clear that our efforts will actually be able to prevent that in favor of voluntary, or at least non-violent, co-existence at a distance. This is primarily because it involves convincing leftists that forcing themselves and their retardation upon us isn’t good for their health. Without actually bloodying them up a bit, I don’t believe they will ever be able to grasp this, unfortunately. They are really, really dumb rabbits with not much in the way of ammunition or testosterone. And these safe space rabbits are very, very intent on forcing the sane portion of the population to fall in line. Those who make peaceful revolution impossible will make violent revolution inevitable.

Here is a picture of the lugenpresse making up some bullshit (I would assume). Plenty of rioters are behind her for a back drop.

I am not sure what she is doing, but I would assume she is looking for a butt to sniff.

Keep pissing off middle America with your bullshit, and you might end up regretting your mislabeling as they decide to just own it (agree and amplify 100X….). If they are all going to be called Nazi’s anyway, might as well get the perks of ethnic homogeneity that comes with the genuine article. At least, that is what a growing number of people are starting to think. Leftists, beware what you summon from the abyss!

Obviously that didn’t happen, but not for want of trying. Straight out of Alinsky’s rules for radicals.

If you love Mexico so much, you should move back there.

I don’t even know what to make of that. Probably some jew didn’t get the memo and took their miscegenation pill on accident. This creates a problem for us though, because where should we deport him? Decisions, decisions. Also, no my mom didn’t know I was there. Not sure why that matters. Oh, right. Leftists are mostly children trapped in adult bodies. We will probably have a good laugh about it the next time we talk.

Hard to read, but the caption delivers the doublespeak clearly. This sage piece of cognitive dissonance also comes from our latino jew [the other side of his sign]. Actually, I think it is a bit more apt for our side than theirs. The time is over for tolerating leftist intolerance of us. They need to be removed by whatever means necessary.

I saw this sign and flag dangling around each other and asked the guy in the foreground to pose for the picture.  Yep, flag carrying communists were out to protest Spencer. After the picture was taken, I talked with this guy a bit. I didn’t reveal my power level though since I was in the middle of a bunch of crazed communists looking for blood. He told me that he was actually a libertarian and didn’t support the communists. If you are a libertarian, why are you protesting a guy giving a speech? What exactly is libertarian about no-platforming? Even if you believed in unprincipled exceptions in this case, why would a libertarian stand side by side fucking communists to protest anything? Those fucks want a one-world centralized government which makes life miserable for as many people as feasibly possible. Not to mention if he actually read deeper into the philosophical basis of the alt-right and dark enlightenment, he would easily see we have much more to offer in terms of economic and social freedom broadly in line with the libertarian ideal (while not actually being that ideal, we are trying to be practical about it). The guy was very confused, obviously. And he seemed it in talking to me. He probably got swept up in the excitement swirling around campus and lost his principles. Stupid, but what do you expect from an 18 year old? I didn’t want to give his face away, though, so I employed my truly shitty paint skills to cover his face up. Do you like my rendition of a lolbertard?

I didn’t really get many great pictures in the event, but here is one to show I got in. Brett’s wife and I weren’t on the guest list so we almost didn’t make it in on account of capacity limits. Brett asked to be added in advance, which I didn’t think of doing. We had to wait in this line outside and were in the last group of ten people to be allowed in. Talk about cutting it close! Anyway, the main reason this was even a problem is because of all the prig-progs who were going in to be disruptive and shout out stupid shit. People who were legitimately interested in seeing Spencer were not allowed in because of these shitlibs. So that pissed me off, and I got even more pissed off when they started shouting out stupid shit and interrupting Spencer. These leftists were truly novice shit-posters and their interruptions weren’t even funny. Shouting “You’re a racist” is really unoriginal. I decided to join in on the party and heckle the hecklers myself. The difference between myself and them is I have been hard shitposting for years and can come up with some well-timed quips. (Ask Brett). Of course, I do this under alts and in places that either accept shitposting or deserve it (leftist forums). I think the most popular shout-out based on the reactions of shitlords around me where when blacks were claiming it was they who built America and the white man stole it all from them. I “agreed” with them by informing everyone that sky-scrapers were made out of cotton. If you are going to be disruptive, at least get a laugh. Also, if you can’t stop the leftists from causing obnoxious disruptions, the least you can do is embarrass them with superior right wing shitposting. I like to think that myself and the others who participated in this counter-disruption helped things by putting the leftists in their rhetorical place. And also let them know that if they actually started a riot they weren’t going to get out without getting banged up. Intimidation works both ways.

There were several occasions where fat black “women” were being very mouthy and almost initiated fights. Another weird looking dude tried to rush Spencer on the stage, but he was stopped and I think arrested. I don’t know for sure but he looked like a black albino from behind. Cultural appropriation anyone? Anyway, there was lots of grandstanding. One chic went up and complained Spencer offended her by calling someone in the crowd an autist, then she ran away crying and another chic gave her a hug. Their moment of “bravery” and solidarity was thoroughly ruined, however, by me loudly mocking her as a special snowflake. That got some good laughs. Spencer handled it all without breaking a sweat. I know I couldn’t have done that with going off on those retards. He really has mastered the rule of cool.

This artistic shitlord was holding up this sign during the speech and it was quite entertaining to the rest of us. After we got out, but before we went to the after-party, I asked him to pose for this picture. Again, I covered up his face so that he wouldn’t get doxxed. At least not from any picture that I upload. Please marvel at my wondrous ms paint skills. There isn’t too much to report about the after party except to say it was fun. One guy claimed /r/darkenlightenment was helpful in red-pilling him. Always glad to be of service.

Seeing all those leftists really brought it home to me that these people hate us. And by us, I don’t just mean reactionaries or alt-right shitlords. I mean every white person in this country. Especially those who have even the most modest amount of reservation about our demographic replacement or wealth transfers from working class whites to the ethnic underclass. They hate us and want us destroyed. They have no intention of listening to reasoning or respecting our right to exist and disagree with them. I really do not know how we will ever be able to shed ourselves of these parasites without the use of force, and probably massive force. At some level, I think the underclass and other leftists recognize that their existence is dependent on us. Where else would they be able to steal the money to pay for welfare? Whether that welfare be make-work “professorships” or the official thing. If we collectively decided we were not going to pay for any of their shit anymore and would rather watch them starve, they would starve. And they know it. They aren’t capable of taking care of themselves. To stop us from collectively recognizing that we don’t need these ingrates and would in fact be better off without them, they are resorting to these intimidation campaigns and gaslighting the white population. “You raped, murdered, pillaged this country from other races, especially blacks. This country was stolen by whites from the work of blacks.” They need this lie not only to prop up their fragile egos, but also to keep the white population complacent in its current abused position. They are desperate for the lie to be maintained because its loss is an existential threat. Unfortunately for them the cracks are widening and white guilt will be cast off like so many other lies. They themselves will be cast off shortly after.

As long as we stay committed, we will change this culture and we will take our country back. Stick to your guns folks.

[EDIT: This dailymail article has a lot more photos.]