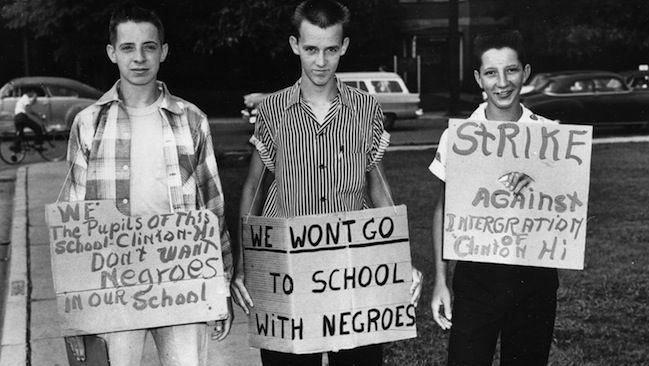 So the story of Obama’s Orwellian plan to counter white flight has been making the rounds lately. Essentially what leftists want to do is make it so that it is impossible for whites within large metropolitan areas to escape the horrible consequences of leftist policies by moving outside of the city limits. They are using a several pronged attack to do this. On one side, they are keeping federal money away from suburban cities which won’t play along with the scheme to incentivize them to play. If they do play, they are subtly being forced to give up their independence with respect to the major city in the area. To receive the money from the feds, they must report a whole series of measures publicly which will demonstrate racial segregation and disparate impact. This publicly available information could then be used to sue municipalities and of course proof of intentional discrimination is not necessary based on a recent supreme court case with respect to Texas.
In fact, judicial fiat is likely to be the main mechanism by which cities will be forced to cede authority to the federal government. (Amusingly, the leftist activists working with the feds are apparently too stupid to realize what is going on and thus think it won’t have the effects they want.) To avoid getting sued and to continue getting federal money, these suburbs will be given options to increase diversity in the area such as building section 8 housing in relatively wealthy areas; including advertising this low income housing to the inner city underclass. Many cities have zoning laws which prevent these sorts of high rise living buildings from being built. Either by lawsuit or by coercion through federal money withholding these cities will be forced to reverse these zoning laws. In other words, whites (and even the exceptional minorities who escaped their dumb and violent co-ethnics) who have worked very hard and spent way more money than should have been necessary will have all of their equity wiped out. Leftists plan do this to virtually every suburban community[pdf] throughout the entire country. If you live in one of these communities, you should seriously consider getting out now before your property values plummet.
–
Fortunately or unfortunately, depending on your perspective, I am a young guy with little in the way of responsibilities. I only have myself and my own bills to pay for. I am debt free with no wife, no children. In other words, my level of freedom to make decisions is quite high and this new information significantly reduces the chances I will ever buy a home (at least in the US).
My friends and I have had the conversation about whether or not it is worthwhile to buy a home as opposed to rent well before this new federal policy was known. We have discussed the pros and cons. The obvious pro for buying a home is that instead of rent money disappearing into the abyss, it goes into equity which you may eventually be able to get back. However, there are negatives as well. Once you get the home, you essentially become locked into a certain lifestyle. You have a mortgage that you have to pay every month, so you need to have a regular job that you can’t leave easily. If you leave you can’t pay the mortgage and you are screwed. If you want to travel, you are limited to very short durations of travel because you have to get back to your job to pay that mortgage. If you ever do decide you want to leave even for another job, you have to go through the whole hassle of selling the house. This could take a long time, and depending on the market, you might end up losing money anyway (home equity is of course a gamble). So, as a renter you have the option of jumping ship to something new at least every year and possibly more often if the apartment allows you to buy yourself out of the contract. So the major pro with renting is increased flexibility with your life choices. This is difficult if not impossible to quantify financially. How can you put a price on freedom? The main advantage of buying a home is equity, which is easy to quantify but is increasingly unreliable.
–
Though the government has been moving in this direction for a while, it seems as though they are accelerating an alarming trend which will make home purchase even less worthwhile. Many communities have been curb-stomped and responsible citizens screwed because the government subsidizes poor people (especially blacks) to move into communities they otherwise wouldn’t be able to afford. Contrary to popular belief, it is not just wealth which differentiates different classes of people. The underclass is more criminal than the middle and upper class. They engage in violent behavior more often which reduces the safety of the community. They do not do as well in school and lower the quality for the children of the higher classes. So what ends up happening when you move the underclass into reasonably healthy communities is a large reduction in the quality of life for the more responsible previous residents and lowering the property values. If you buy into one of these safe areas with good schools, it is now very likely that in a few years your money will be lost because of forced re-location of the underclass to your community. The gamble on home equity is thus very bad at this point.

On balance, I have always found more value in the improved flexibility and freedom of renting than the potential gains from home ownership. The idea of being locked into one place for 30 years just seems repellent to me. In the days of yore, a young man like myself would have been able to reliably start a family which would make buying a home and sticking with a single job in one place for 30 years more logical, if not more appealing. This of course has already been gutted because chances are all my work and efforts could be stripped away from me at a moments notice by an incorrigibly capricious woman with me having no recourse to protect myself whatsoever. Now, not only is that a worry, I now have to be concerned that even if a potential wife didn’t do this, or I decided to go into it by myself, I will have my equity destroyed by inner-city thugs being planted right next to me. Or Islamic refugees from some third world shithole. Clearly the US is a sinking ship which is why I have felt for a long time that eventually permanently moving overseas is probably the best bet for me personally. In places like Asia, relative safety and the ability to start a family under reasonable circumstances is still very much alive. Until then, though, I will maximize my flexibility over equity. You never know when you might suddenly need to jump ship.

–
I am sure I am not the only guy who feels this way, or at least there are probably many other men with similar perspectives. This probably constitutes a huge opportunity cost for the housing industry and maybe all industries. The more the government disincentivises productive men, the less they will stick in one area with one job. They will pay less taxes, they will make less purchases and will downgrade the purchases they do make. Ultimately, it will be society generally rather than these men who suffer the most as a result of reduced economic activity.
Find other great dissident right content with the two Atavisionary RSS feeds: Atavisions and Prolific Atavisions. In addition, download the free ebook Smart and Sexy to learn what, how and why there are biologically based cognitive differences between the sexes

One Reply to “Buy or rent?”