Below is an interview between Peter Schiff and some typical leftoid bimbo from the Progressive Policy Institute. I was not very familiar with Schiff prior to finding this interview, but on the topic of worthless degrees I am in total agreement with him. Government guarantees are the leading cause of increasing tuition costs. People (and institutions) aren’t forced to make financially sound decisions, so they don’t. Kids are too dumb and inexperienced to really be expected to make competent decisions. Universities suffer no consequences for their graduates when they default or otherwise perform poorly, so they don’t really care or need to care what happens to students after they graduate. The loans are guaranteed by the government, and the debt isn’t legally dischargable anyway (i.e. the return of debt slavery), so the banks don’t need to care all that much about student defaults. That is the assumption they are working with anyway, but of course that assumes the student debt bubble doesn’t expand so much that even the government wouldn’t be able to properly handle it. I am not convinced this is a sound assumption.

That lending institutions don’t have any say in what kind of degree paths they will and will not fund doesn’t help much either. If banks had to actually swallow the losses when students default and the ability to discriminate based on major and other important factors, there would be substantially less funding available for various Marxist studies degrees. That would be a much better world to live in.

The bimbo in the video believes, like all faithful progressives, that more education is always better and the solution to pretty much every economic problem. The idea that extensive training in under-water basket weaving may not actually help anyone earn more money just isn’t possible in her world. When confronted with reality she flatly denies its existence and confesses her faith in unlimited education ever more determinedly and emphatically. “No degree is worthless,” she insisted, and mean old men like Peter Schiff, who understand economics, “don’t get to decide who goes to college.” Well, indirectly decide by getting rid of easy government money that has to be guaranteed by taxpayers whether or not the decisions made by students are reasonable; whether or not the universities are providing a useful product at a reasonable cost. The road to perdition is paved with (the) good intentions (of progressives).

One particular statement I found curious was her attribution of poor job prospects in recent years being a result of the current “low-innovation economy.”  Whatever she meant by that. Recent years have been rather tough for a lot of people, but she seems to forget that this is largely a result of the last government inspired bubble that popped.  Specifically, the housing bubble originated in government interventions designed to artificially increase home ownership, especially among poor minorities. This was done mainly by forcing banks to lower standards or risk getting sued by the government for disparate impact “discrimination” and also providing a risky loan sink in the form of government-backed Fannie Mae and Freddie Mac. Being able to sell off risky debt and getting it off the books makes creating that debt more palatable for banks. This theme or set of justifications for government intervention is also ubiquitous in the current student loan bubble. Everyone is supposed to get a degree, but it is especially important for women and minorities to get them. Currently, this bubble consists of 1.3 trillion dollars in debt and rising. Propaganda is also mainly focused on taking advantage of the demographics who, with less innate critical faculties, are least likely to get through the system unharmed. As much as low-IQ minorities and women get on my nerves, I do not approve of those taking advantage of their deficits for personal gain.

Why might our economy be “low-innovation” or more accurately low in business formation and job creation? It is conceivable that misapplied education itself is playing a role. Having young adults waste many years on learning economically useless information and “skills” instead of starting businesses, or accumulating skills which could later be used to start a business doesn’t help the economy or create jobs. How many businesses require an understanding of medieval french poetry, for example? Hyperbole aside, much of what you learn in a typical humanities or soft-science curriculum would be equally useless with respect to starting and running a business or even just participating in the workforce generally. It isn’t hard to understand how someone developing skills in carpentry, pest control, electrical maintenance and any number of other blue collar occupations is far more economically valuable. Those skills are also more likely to help people start a new business and create jobs. To paraphrase Schiff:

“Wasting money over-paying for worthless degrees isn’t going to help the economy… A lot of the curriculum, a lot of the courses do very little to improve human capital… You [the bimbo] are playing into the [hands] of colleges and universities. They want to exploit our kids”

The idea that university administrators are taking advantage of the current over-valuation of education and government interference to line their own pockets is in my opinion very likely to be true. The increased tuition seems to be going mainly to non-teaching administrators rather than increasing the number of actual teachers or other factors which may be of educational benefit, like better lab supplies. During the same period, while costs to students were going up, the universities were saving their own costs by switching teaching duties to less-experienced part-time professors and teaching assistants. Whatever that money is being used for, better educational experiences for students doesn’t seem to be a priority.

One thing I would like to point out about this interaction is the sex of the two interviewees. While right leaning women and left leaning men are common enough as to not be remarkable, it is worth remembering that there are somewhat strong sex differences in political attitudes, among other things, over the population.  Men more naturally fall into right-wing and/or libertarian positions whereas women more often fall into progressive, paternalistic, and big government positions. Evolutionary psychology suggests that women have preferences for paternalistic, big government because in the ancestral environment lack of security was almost always their biggest trouble. They had to rely on males almost entirely for physical security and also had to depend substantially on males for resource security (i.e. food). Given any say in how society is structured, women will tend to choose arrangements which appear to provide that security regardless of circumstance. This pattern is observable by looking at the increases in government spending in various jurisdictions immediately after women’s suffrage was approved. A number of US states enacted women’s voting at different times prior to the 19th amendment and in every instance taxes and expenditures increased substantially. 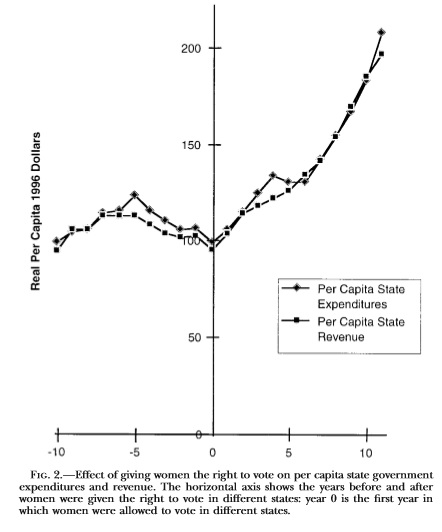 Proof enough that attractive women like our bimbo are best seen and not heard.

However, physical and resource security doesn’t just arise out of the ether. It has to come from somewhere and has to be paid for by someone. As usual, it is men who had to bear this increased burden. This resource transfer is largely equivalent to state-enforced cuckoldry so as the level of this burden increases so does the number of men who opt-out of the system entirely. This explains to some extent why more men tend towards less government and less taxes. It isn’t that men don’t value security, its that they know the costs of ensuring the security of the incompetent will disproportionately fall on them and thus lower their own prosperity and happiness. It also ultimately lowers evolutionary fitness for the successful which many may be able to sense at some level.

While it is useful to be aware of possible evolutionary explanations for the poor political choices of women, that doesn’t mean directly perceived advantages should be ignored (or be considered mutually exclusive). As I mentioned in a recent article, women tend to incur more debt to get a degree (and in general), and more often choose degrees which are less likely to confer employable skills:

Men also succumb to pursuing essentially worthless degrees, but they do so at a lesser rate than women and since the absolute number of men pursing college degrees is less, the problem is quantitatively less severe even when they do. Some of the most common degrees women are getting, such as business, health, and biological sciences, do make them more employable and socially valuable. Most, however, are notorious for conferring little value in the job market and can be expected not to improve income significantly. Among the top ten most common subjects studied by women as undergraduates are education, social science, psychology, visual and performing arts, communications, liberal arts and humanities, and English.

With this pattern of economic and educational foolishness, it is not hard to understand why many women favor more wealth transfers with respect to student loans.  More wealth transfers here softens or eliminates the financial costs of poor decisions on the part of the poor little ladies. It is hardly surprising when a group of people selfishly vote in their own interests regardless of the costs to others or society as a whole. However, as I have mentioned before more than once, this only works in the short term. Eventually the guys figure out the scam and once the game is up they withhold their resources as much as possible, which can turn out to be quite a bit. The ironic result of these policies that ostensibly increase female well-being is that there will be substantially less resource and physical security for everyone.

As a closing note, I do agree that to a substantial extent it is quite unfair to dupe naive kids into taking on massive amounts of non-dischargable debt for the often worthless product that is today’s university degree. Especially for women who can’t really be expected to have the same level of critical thinking skills as men for biological reasons. If these loans are to be forgiven, I think the best way to handle the cost is to take as much of the money as possible from selling off the property and endowments of the universities. Considering the holdings of universities this could easily be worth tens or even hundreds of billions of dollars. Since the universities were the ones actively encouraging this fraud, they should be the ones expected to make things right. Not to mention this would largely destroy the institutions most responsible for propagating the far-left narratives destroying our civilization. No reason not to kill two birds with one stone.