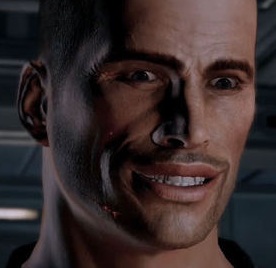 When I first read about the original Mass Effect, I found myself very interested. A third person futuristic shooter with significant roleplaying elements seemed like a very unique style. Unfortunately, I did not own an X-box at the time so I did not have a chance to play the original or the sequels when they were first released. However, last year I found out that there had subsequently been a release for the PS3. I decided to get all three games and play straight through one after another.

The games were very good from a technical standpoint and in terms of gameplay. However, as the games progressed (pun intended) the influence of Cultural Marxism crept insidiously up until it made Mass Effect 3 almost unplayable. Unfortunately for me personally, and fortunately for this review, I was completely unaware of the controversy surrounding the progressive stance of the third installment which allowed me to experience it without preconceived notions.

The first issue I have with Mass Effect 3 is the shift to an over-emphasis on romantic relationships. A game of this sort is about roleplaying a tactical commander set amongst a myriad of alien species, both hostile and friendly. You are there to lead your team against the odds and save the day, to navigate political intrigue and win by force when necessary. In short, it is for role-playing the ideal masculine character who must confront difficult situations that brings out the best of his masculine virtues. To have large digressions into discussion about relationships and romance really distracts from the desired purpose of the game (from the consumer’s perspective). For example, you might be walking by couples talking to each other about their relationships or NPCs complaining about their spouses. There is also significantly more romance related dialogue for Shepard. In essence, the game and the main hero were significantly more feminized than the previous installments. That might be OK if the target demographic for this game had a significant number of women. The thing is, the large majority of gamers are young, straight men. It makes zero sense to cater to a demographic who won’t be interested in a game like this regardless of how many female friendly attributes you add to it. Game companies will never get large populations of women to play games like this because this genre of gaming is not appealing to most women. The only thing you do with this is alienate the guys who actually want to play as a tactical commander. Guys bought the game to shoot aliens, not hear npcs whine about their lovers. The first game had it right, there was very limited dialogue dealing with relationships and you could skip it easily (Sorry, I have no romantic interest in a tentacle head). It seems that if there is ever a point where there is a product or form of media that specifically caters to the interests of men, there is always a loud and vocal minority who demand that it does more to cater to women and for some unknowable reason that vocal minority is listened to despite the changed implementation alienating the largest fraction of fans.

Too much romance was bad enough, but it gets worse than that. I haven’t done an exact count, but my impression was that there are more homosexual couples in the game than heterosexual ones if you include NPC-NPC interactions.

In one example among many, there is a point where the lesbian romantic interest comes up to your quarters and beats you at chess while giving intentionally misleading innuendos if you have a male Shepard, though presumably it would lead to more if you had a female Shepard. It is obvious that bioware did not change the dialogue to match what you would expect from an uninterested lesbian talking to the male Shepard. Given her character, she should not make flirtatious comments towards the male Shepard. Instead you have a lesbian being extremely flirtatious with a male character who then suddenly changes her disposition and rebukes him. In other words, she is a tease. I can’t imagine a way to make a character more annoying or better evidence for lazy writing on the part of bioware.

In another example, there is a woman complaining on the phone that her “daughter” with another woman couldn’t be sent to her family because she was disowned by the mean traditionalists. I sympathize with people in this situation to a small degree*, but being preached to about this politicized issue is not something that should be happening in this game.

I have nothing against gays. Fluke biological events almost certainly explain most of this evolutionarily maladaptive aberration in the same way biology accounts for downs or muscular dystrophy. As an Atheist, I don’t view it as some sort of moral question or as a sin. However, just because I can understand and accept that there are and will be homosexuals**, that does not mean I want homosexuality forced on me in video games or other media. I do not, and will never, enjoy content that has a heavy homosexual theme. I don’t even like heterosexual relationship discussions in my games or media. Why does bioware think I or the rest of the straight male majority want to hear a gay dude crying over his gay lover? (Yes, there is a scene like this in the game and no you can’t avoid it). So again, the interests of the main demographic for this game (straight male gamers) is thrown under the bus in an attempt to be inclusive to an even smaller minority of activist whiners and to push the “correct” values on a large audience who were never interested in the game for any sort of partisan political message.

What does bioware say to the majority of its customer base when they complain? Get over it. They apparently know what’s good for us. Small minorities have to be catered to despite the fact the game will be much less enjoyable as a result for the main demographic. I am not against there being separate video games that can cater to those minorities, but I know that I don’t want that content included in the games I play because it kills the immersion and enjoyability of the games. For a significant fraction of the gamers, this was also done despite the fact that the depicted lifestyle might be deeply offensive to their religious beliefs. I may not believe in religion or god or be offended for this reason personally, but I find the attempt to force values onto religious communities to be repugnant. Deeply religious gamers are probably also a minority, why are the interests of this minority ignored in favor of homosexuals? Homosexuality should have been left out, or at least there should have been an option to not have it be part of the game for those who didn’t want it. Content that aggressively pushes politically progressive agendas when playing escapist entertainment destroys the gaming experience and as a result I will be avoiding bioware content in the future. Not the least because of how disrespectful they were to the part of the fan base who voiced their concerns. I suspect that I will not be the only one.

Another aspect of the lesbian beating Shepard at chess should be addressed. Beyond being annoying for having incongruent dialogue and imposing a specific value system, the scene is also completely disconnected from reality when it comes to her victory at chess. The ratio of men to women in chess favors men to such an extreme degree that they have to create separate all-female leagues because there aren’t enough women who can compete effectively with men; not unlike most physical sports.This is due to biological differences between men and women in visual spatial, numerical and mechanical intelligence as well as the greater variance in intelligence among men. This leads to there being a larger number of very high intelligence men than women. I know that some women are better at chess than some men, but nonsense scenes like this are both unnecessary and ineffectual at achieving progressive goals. Seeing women winning at chess in fiction will never translate to women winning at chess in reality. The population that makes up the most elite chess players will always be overwhelmingly male. Just like the population of people who like to play video games will always be overwhelmingly male.

The Leftoids who make up the cathedral have this weird (and incorrect) idea that different outcomes for different groups result not from innate biological differences, but from social conditioning. They think if they expose young people to the “right” types of tropes in stories they will be able to increase a person’s aptitude for a field (or make them have the “right” opinions in the case of values). In this game, the relevant cues are female soldiers, scientists, and technicians. They made a lot of female scientists and technical specialists and several female soldiers in all three games. This, of course, is nonsense. Elite Men who are well-suited to engage in both extreme physical and mental tasks (see studies above) are overwhelming more numerous than elite women for biological reasons. Women didn’t need to be elite to be successful in evolutionary history, men did and still do. Though I know the portrayal of women is extremely unrepresentative, it doesn’t bother me as much as the imposition of progressive values or excessive female inclusiveness detailed above. For one thing, the technobabble dialogue doesn’t directly annoy me like relationship dialogue does, and I don’t care who voice acts it. However, it is another example of leftoids trying to social engineer and force progressive values on the general public and is worth mentioning and understanding.

Games are meant to be escapist entertainment. They aren’t supposed to be used as a soapbox for leftoids to force tolerance and biologically inaccurate representations down the throat of the gaming community. This side content was a very dark stain on what would have otherwise been a great game franchise.

* There is robust evidence that children who are raised in homes without fathers have a lot more difficulties in their lives. Generally speaking, fatherless homes should be avoided where possible. In cases of adoption, a lesbian home might be better than nothing or an abusive home, but childbearing that does not include the presence of a father should be discouraged.

** Male homosexuals tend to have extreme sexual lifestyles with many partners which contributes significantly to disease spread. HIV is the most well known example, but it is hardly the only. Extreme promiscuity probably should not be acceptable even if homosexuality is viewed as unavoidable.

4 Replies to “How Cultural Marxism ruined the Mass Effect franchise”