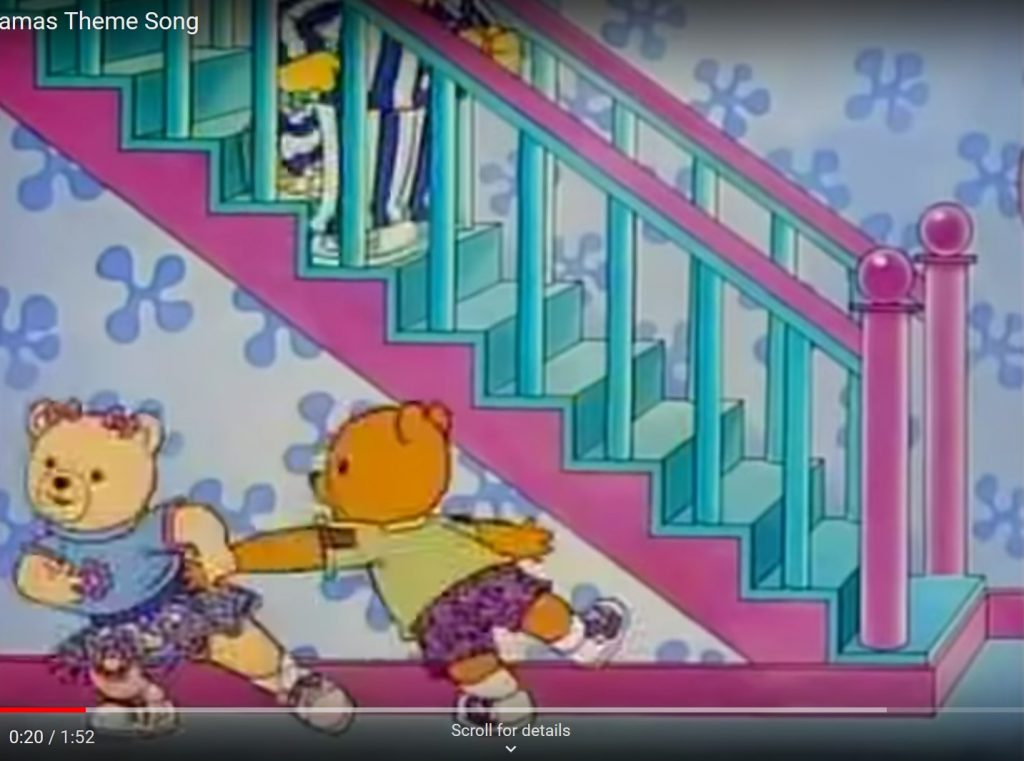 I know this is an odd post topic, but I was just made aware of the somewhat dark undertones present in the theme song for this old children’s show. It may be nothing, but after the revelations from pizzagate and the relative ubiquity of occult symbology in popular media, it is worth a ponder.

Originally called “Bananas in Pyjamas,” but changed to “Bananas in Pajamas” for Americans, it was started as a song written in 1967 by British composer Carey Blyton. It is an annoyingly catchy tune, which can easily get stuck in your head, and thus became rather popular. In the early 90s, the Australian broadcasting corporation created a show based on the popular song. You can watch the intro to the show. And please do before we continue. Pay attention to both the imagery and the lyrics.

The song begins with this image.

A couple of things jump out here. First, bananas are fairly commonly used as a euphemism for Penises. They have a very phallic shape. Second, these bananas are in pajamas, which immediately implies sleeping together in a bed as well as the sex which usually also occurs in beds. These two bananas, are implicitly leaving their bedroom where they were presumably sleeping together. There is a strong homosexual undertone to this image. In addition, they appear to be not just walking out of the bedroom but leering out as if they want to sneak up on someone. This is a framing of a shot which would not be out of place in a horror movie. Monsters of various sorts are pretty much always shown entering the world through doors and portals. But what are they looking for?

They proceed to the stairs, but not with a normal walk. They are actively sneaking in a quite creepy manner. Easier to see in the video above, but here is the screen shot.

The two then walk down the stairs in what I would describe as an aggressive manner. Evocative of the angry and abusive father trope. Or in this case, angry fathers….

At the bottom of the stairs we see what it is these two are going after.

The clothing as well as the shortness of these three “Teddy Bears” compared to the bananas obviously demonstrates them as children and the bananas as adults. Tell me, do they look to be happy to see “bananas” coming down the stairs? They look frightened to me. Also notice the short skirts on the female teddy bears. They are practically exposing themselves in this drawing. The FBI document on pedophiles didn’t mention “teddy bears” as a code word used by pedophiles, but it isn’t hard to see how it might be.

Did you notice the clenched fist? To highlight the fear aspect, two of the children start running away when they realize what’s coming. One hesitates in shock, I guess, but is then grabbed and dragged away. This is also a very common horror movie trope.

Just a bizarre image that I find uncanny. The wink and the thumbs up implies a secret that they, and presumably some of those in the audience, are in on. Its like they are intentionally breaking the fourth wall to implicitly ask “Are you in on the secret?” What secret? “Bananas” chasing “Teddy bears,” the lyric which begins on this frame and continues onto the next…

Something tells me real children in this situation would not be smiling.

This shot is pretty self-explanatory.

I am not certain what meaning, if any, “Tuesdays” might have in this lyric but overall children getting caught by surprise by adult men is the clear subtext. Although it isn’t all that subtle.

Perhaps I am just reading into this too much. Although I had heard of this show, I never watched it as a kid so I don’t know much about the actual content of it in general. Perhaps someone who did can provide their perspective on the show overall. Either way, there is just something about it that seems off. It would also be worthwhile to know about the backgrounds of both the song creator and the creators of the original show.

4 Replies to “Bananas in Pajamas”