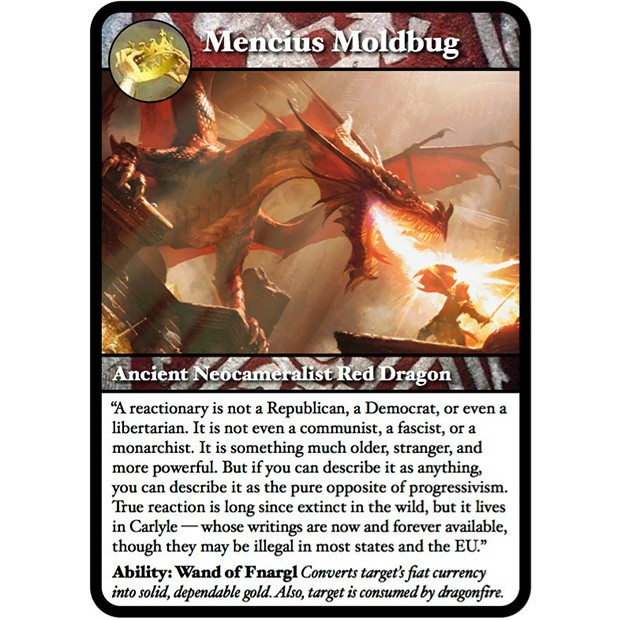 I just set up a new system that should result in a post being made to /r/darkenlightenment each day that contains one or more links to Moldbug’s unqualified reservations. I made a second sub, /r/TheDailyMoldbug, which will only have these posts for more easy reference. Posts will start being made starting on August first. Below is the announcement I have made at /r/darkenlightenment outlining my reasons for setting this up:

Tl;dr There will be a post linking to Unqualified Reservations each day starting on August 1st. The main goals of The Daily Moldbug post:

I can’t remember exactly when, but about six months ago there was a self post which was all concern trolling, but I decided on leniency in that particular case and didn’t remove it. Its main point was that there had been a change in topic focus in submissions to the sub. IIRC the complaint was that there were too many HBD posts compared to other posts. Personally I thought the he was exaggerating the issue, and anyway HBD posts are always welcome because that issue is and always has been part of the dark enlightenment. I am not going to remove relevant posts to come to some subjective “proper” balance of topics.

However, that doesn’t mean that steps can’t be taken to add more variety and/or remind new people of the basics. Immediately after reviewing the above-mentioned post I started working on a project which I thought could improve the sub and address these concerns. That project is The Daily Moldbug post. The idea is that on a daily basis automoderator will make a self-post submission that will include at least one link to Unqualified Reservations. UR is the blog of Curtis Yarvin who wrote under the name of Mencius Moldbug.  He coined the term neoreaction, and was the initial inspiration for many or most of the blog writers currently in the endorsed categories on this sub. This includes yours truly, and that counts for both my blog and for starting up this sub. It was my initial reading of “A gentle introduction to unqualified reservations” that motivated me to take over here and start building this place. In other words, neoreaction/ the dark enlightenment is strongly tied into this original material and new-comers should be and remain familiar with it. I also thought it would be helpful for people who want to go through these posts, but are daunted by the sheer volume. A daily post sets up a clear and structured schedule at a manageable pace.

To get this project working, I had to compile a list of all the UR link addresses and decide which ones to post and in what order. What I ended up deciding was that every single UR post will be linked to, in chronological order, but not every post will get its own separate submission. I didn’t want to omit a post based solely on my subjective opinion and I also created a reasonable work around for really short posts. Short posts, meta announcements, and poems will get included with the immediately preceding long-form post. For example, on some days it will just be one long-form UR link, on others it will be one long-form UR link followed by one or more links to short posts (usually poems) that came immediately after it chronologically. There was no hard rule on what counts as a short post, I just used my best judgment based on the length and content. With the above in mind, I ended up with 240 individual daily Moldbug posts. They will start getting posted daily starting on August 1st 2016 and the last post will be on March 28th 2017. The cycle will automatically repeat with the first post being repeated again on March 29th 2017 and on until the end of the world. Of course, this is assuming I coded everything right. I have checked and rechecked but it is possible there are mistakes in there somewhere that I will need to fix. If so there may be some slight alterations of the schedule, but even so I am committed to getting this up and running. If you ever notice an issue with one or more of these posts, please message the mods. If you are following along and reading the daily post each day, and fall behind for whatever reason, you can go to the new sister sub /r/thedailymoldbug to catch up. This tracks the submissions in the main sub and won’t have anything else, so you can quickly go back to where you left off.

The original content from UR makes it clear that neoreaction/the dark enlightenment was always meant to be a philosophy and not a movement. Basically it is an intellectual and/or philosophical branch of thinking that movements, such as the alt-right, can use in whatever battles with leftists they find themselves in. Movements understandably have leaders and structure. Philosophies can have leaders as well, but it is harder to define and much harder to defend the title. At this point, the only one who really has any standing to claim leadership or official status is Moldbug himself. Myself and many others don’t believe any other entity, regardless of claims to the contrary, has any standing to claim leadership or official status of neoreaction or the dark enlightenment. Even if someone did have such standing, it is arguably heresy to purist neoreactionary philosophy. Anyone can go through the original moldbug posts and start writing on the same topics without much or any reference to writers that came afterward. With the daily moldbug post, it will hopefully be easier to encourage more smart people to do exactly that.

Lastly, we circle back to the original reason I started this project: Concern trolling. I have spent a great amount of effort getting this daily post going in order to address concerns some of you have. Getting all those links compiled in the right order, categorizing long vs. short, and coding around each submission was an incredibly tedious process. I have done far more to address these concerns than 99% of the other mods on reddit would have bothered with, for free, and despite concern trolling being officially against the rules.  I even had to ask reddit to make an exception on number of allowed scheduled posts, which they kindly provided (I was pleasantly surprised). As such, I consider these concerns thoroughly addressed and will be taking a harder stance against concern trolling in the future. When the sub first started people complained it had too much influence from the red pill, later other people though it was too much about HBD. In the last week I have had a number of comments claiming it is too alt-right, or too white nationalist, or not true enough to the original work. Whaa, whaa, whaa. Somebody is always going to be unhappy no matter what is done. Typically such concerned comments come with a very distinct lack of details, examples, or suggestions for how to improve.

It may, MAY, be true that there have been more posts focused on race recently. But then we have had how many attacks by brown people on whites in the last month? How many riots by brown people against whites have we had in the last two years? If more posts are on race relations, it is because the regular writers are addressing it more because of current events. This is not an issue with the sub so much as an issue with the reality of the world in 2016. EDIT: Speak of the devil. Yet another terrorist attack happens while I am writing up this announcement.

With the advent of the daily Moldbug post, concern trolling comments of this sort are going to now be removed without mercy. First strike will result in a warning and a temporary ban of up to a week, depending on how severe it is. Second strike will result in a permanent ban. I reserve the right to perma-ban on a first strike if a post is particularly egregious. From this point on, you only have two points of recourse for your concerns about the sub.

1) You can privately message the mods with your concerns and suggestions for improvement. That last part is important, directionless whining is useless.

2) If you feel there should be more of a certain kind of content, then it is your job to find and post that kind of content. Don’t whine or complain, submit the content you think the sub needs more of and keep concern trolling out of my comment sections. I have made a list of competent writers which you can use to help in this task.

Those of you who have been concern trolling recently, you know who you are. There will be no retroactive response to comments already made, but from now on you need to follow the above in addressing your concerns.

As always, thank you for being here and please enjoy this new feature of the sub.