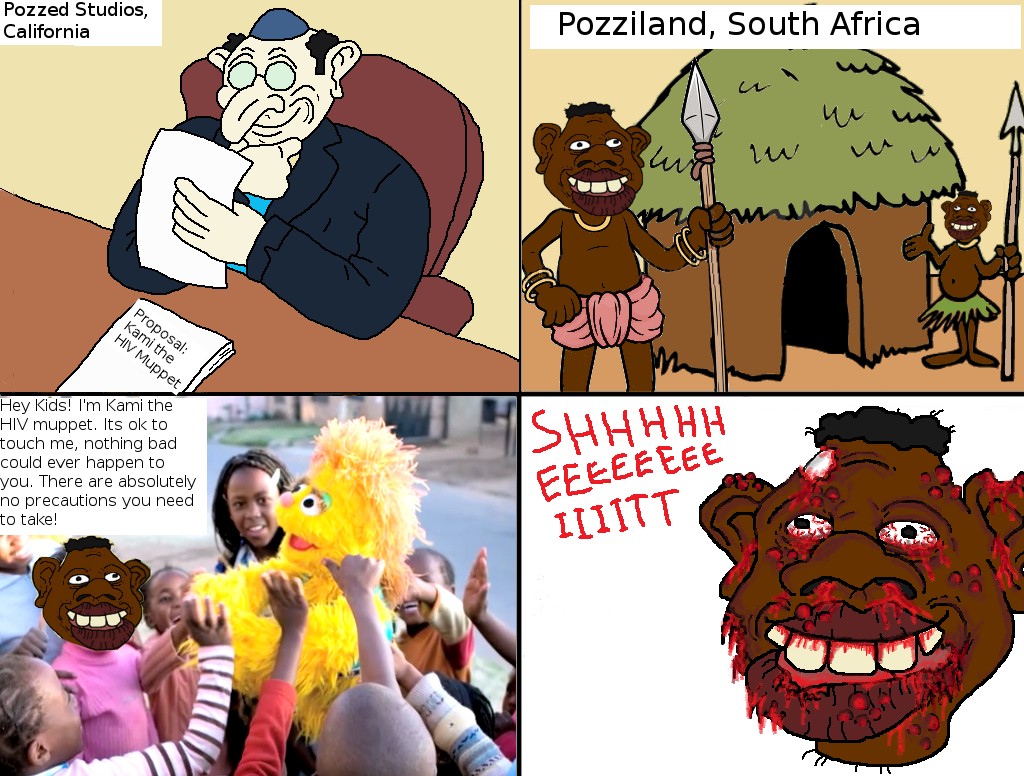 I was recently browsing a subreddit I just discovered called /r/bertstrips. It seems that the focus is to have screen shots of sesame street and to caption them with racist, inappropriate, malicious, or otherwise mean intentions of the characters. Some of them are pretty funny. Well, I found one posted featuring Kami, the HIV muppet: 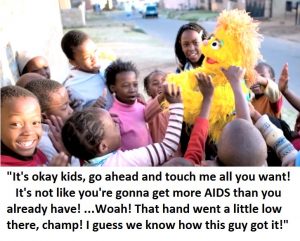 Now, many of the characters are given perverse or otherwise degenerate attitudes, beliefs, and preferences in the comics which are not present in the show. I expected this to be just another example of artistic license on the part of comic makers. Imagine my surprise when I found out that Kami, the HIV Muppet is a real character that is really depicted on the show as having HIV and debuted way back in 2002. Not only that, but prominent celebrities and political leaders have made appearances with the HIV muppet including former president Bill Clinton, Laura Bush (ok, not a political leader but close enough), Whoopi Goldberg, and Oprah Winfrey. See previous link. Apparently Kami is a “bipartisan” supported character in that both cuckservatives and liberals are in favor and supportive of it and have made appearances with it. You can see a video clip of Bill Clinton with the HIV muppet below:

I found the concept of the HIV Muppet to be absolutely astounding. HIV is a serious disease and should never be taken lightly. While it is true that merely touching a HIV+ person will not result in a transfer of the disease, you would be at quite a high risk should they get injured and start bleeding. High enough that you need to take substantial precautions against becoming infected yourself. Young children (3-7) who would watch sesame street could not really be expected to suddenly recognize the extreme risk should a HIV positive person start bleeding and the risk of transmission experience a large spike. Normalizing and downplaying HIV to children is so irresponsible I can’t even fathom it. If you go back to that reddit comment thread, you will see that most of the commenters there had exactly the same reaction I did. First, complete surprise the character exists at all, then disgust and abhorrence at the sadistic irresponsibility of its creation and promotion. It takes a lot to disgust the kind of community which enjoys bertstrips; leave it to leftists.

Moreover, this character was originally and/or mainly intended for a South African audience where around 1 in 9 people is infected with the disease. I try to avoid conspiracies, but if my main concern was population control in Africa, Kami is exactly the kind of character I would create. Normalize and trivialize HIV to African children so that you can boost infection rates and subsequently lower the population. Of course, it could just be a typical example of the leftist tendency for feelz before realz. To them, the most important thing is people’s emotions. Legitimate and medically necessary precautions are, to them, invalidated if it happens to make someone feel bad.

Intentional or not, if I were a black South African (the target group with the highest HIV rate) I would be hopping mad that this propaganda is going on. Instead of advocating sensible precautions, that population (and very specifically children!) is being encouraged to increase contact with HIV infected persons as much as possible. If blacks still think that the liberal elite is their ally, the creation, use, and promotion by prominent personalities of this character should cure them of that delusion. It won’t, but it should.

Of course, this is not the first nor will it be the last time cultural Marxists attempt to normalize HIV to save the feelings of the few at the cost of increasing the risk to the many. Recently there was the controversy about allowing gay men to donate blood. In the west, gay men are the main carriers of the disease and have substantially greater infection rates than the rest of the population. Banning them from giving blood is a simple and straightforward precaution. Yet, that may hurt gay men’s feelings so leftists rally against it. Unsurprisingly, much of this nonsense protesting takes place at universities. (I didn’t make a big deal about Kami being female because the main audience is South Africa, where infection patterns are more gender balanced, mainly as a result of the African inclination for heterosexual anal sex. However, having her be female in the West makes little sense because it is very much a disease that mostly affects gay men.)

In addition, most states in the US have, in my opinion, a completely lax attitude to HIV+ health workers. Were I running things no one with HIV would be allowed to work in the health care field at all, and probably others as well. Health care workers and patients are both commonly exposed to sharp objects such as needles and scaples that can and do create wounds to facilitate transmission of the disease. In reality testing workers is on a voluntary basis and even knowing a worker is HIV positive is not grounds for dismissal. According to the CDC, there have been 58 confirmed and 150 possible cases of transmission of HIV from an infected health worker to a patient. It says in the last link that there has been only one confirmed case since 1999. Nice try, but reporting cases of HIV transmission from a healthcare worker to a patient is voluntary. Translation: Progs are almost certainly obfuscating the issue by not reporting it when they discover it has happened because they care more about the feelings of gays than they do about the general health of the population. The feds are encouraging them in this by intentionally keeping reporting voluntary. I would be willing to bet a million dollars that there have been quite a few more cases than 1 since 1999, but of course no sensible person would bet against me because that would just be stupid.

One Reply to “Kami, The HIV Muppet”